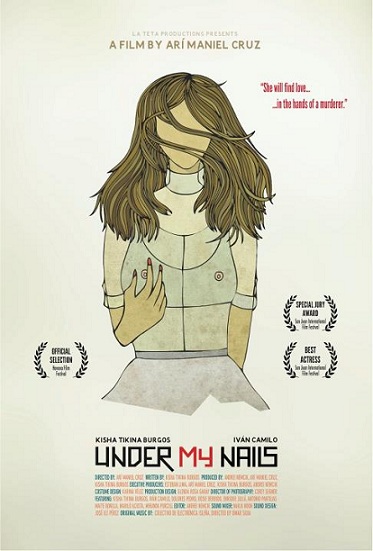 Completed in 2011, Under My Nails is a Puerto Rican feature film created by La Teta collective (see below). The film, which has been on the festival circuit during 2012, was co-produced by Arí Maniel Cruz (director), Andrei Nemcik Toledo (editor) and Kisha Tikina Burgos (leading actress). Also on the cast are Iván Camilo and Marilú Acosta. Under My Nails has won several awards this year including Best Actress Award at the San Juan International Film Festival and “Best Domestic Feature” at the International Latino Film Festival of New York (August 2012). It will premiere in Puerto Rico starting October 25, 2012.

Description: In the Bronx, New York, Solimar a Puerto Rican woman in her mid/late 30s who works in a nail salon becomes obsessed with the violent sexual practices of her new Caribbean neighbors, a Dominican man Roberto and his Haitian-Dominican wife Perpetua. Solimar, as a voyeur of their intimate life, one day witnesses a particularly brutal encounter. Perpetua disappears after that. Apparently she went back to the Dominican Republic to see her children. In her absence, Solimar and Roberto develop an intense and violent sexual relationship.

For the first time in a very long time, Solimar feels a connection with her innermost desires and true identity. The fact that it is wrong makes it right for her. She lost both her parents when she was ten years old. Supposedly, her mother abandoned them causing her father, a very violent man, to commit suicide. Solimar always knew that something was never told to her about what really happened. She has never been back to Puerto Rico and canceled any connection with her past. Everything seemed fine in her new life with Roberto until the sudden appearance of an unidentified woman’s dead body in the Bronx River awakes her suspicion. Is that Perpetua? Is he going to do the same to her? Solimar has fallen in love with Roberto and what could be a threat for her is transformed into an erotic drive that she can’t stop. She has to decide whether to confront Roberto or live with the most terrible doubt.

La Teta is a creative and artistic entity based in NYC that produces film, theater, and television works of its founders Kisha Tikina Burgos (producer, writer, actress) and Arí Maniel Cruz (producer, director). La Teta has the mission to question, suggest, create and deconstruct our personal and collective identity.