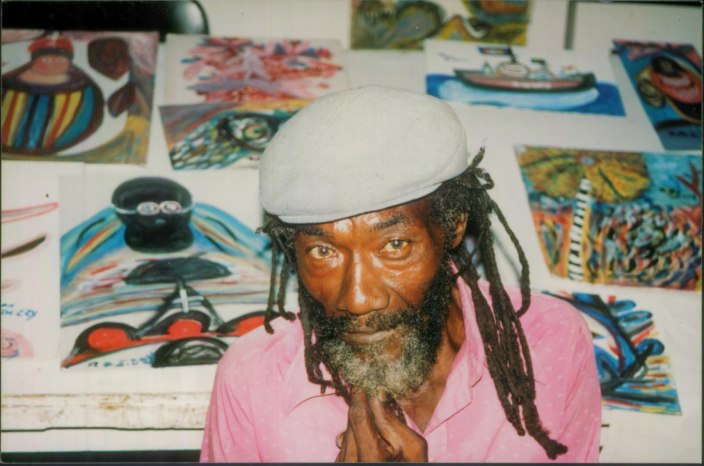 It is believed that Ras Dizzy was born in 1932 as Birth Livingstone, the date and name stated in his passport, although he also used Birch Lincoln and Dizzy Gillespie Johnson, as well as several other variations on his name. He died in Kingston on April 17, 2008. The following is extracted from the obituary published by the NGJ at that time:

Ras Dizzy first came to public attention in the 1960s as a Rastafarian poet/philosopher, who sold his mimeographed tracts and poems on the University of the West Indies campus, although he was already painting at that time. His writings were regularly featured in the weekly Abeng, which was published in 1969 by members of the young radical intelligentsia associated with UWI. His inclusion in the National Gallery of Jamaica’s seminal The Intuitive Eye exhibition in 1979, established him as a major Intuitive, as the Gallery henceforth called those self-taught artists who had previously been labelled as “primitive” or “naïve.”

Ras Dizzy chose to live outside of the system, as one who had no fixed address and, for that matter, no fixed name. His nomadic wanderings extended outside of Jamaica, among others to Haiti and Panama. While there were moments of significant hardship and even some brushes with the Law, he ultimately lived life on his own terms, as a free spirit. David Boxer, the National Gallery’s Chief Curator, described him as “a man who seemingly lives and paints at the very edge of what we might call sane/rational existence.”

The expressive power of his work indeed derived from his eccentricity. [. . .]