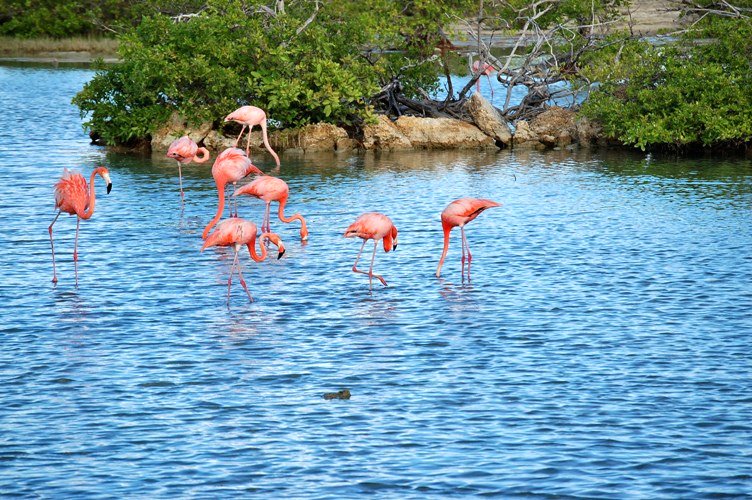 An extensive fuel spill has fouled a stretch of shoreline and oiled pink flamingos and other wildlife in a nature preserve in Curacao, conservationists and residents of the tiny Dutch Caribbean island said Monday, as the Associated Press reports.

The leader of a local environmental group asserted Monday that the spill of crude oil at Curacao’s Jan Kok preserve was from at least one storage tank owned by the Isla oil refinery, the largest business and employer on the southern Caribbean island best known for its diving opportunities and colorful capital of Willemstad. The island’s refinery is run by the state-owned oil company of Venezuela, only about 40 miles away.

“This is probably the biggest (environmental) disaster in Curacao,” said Peter van Leeuwen of the Stichting SMOC group. “The whole area of Jan Kok is black. The birds are black. The crabs are black. The plants are black. Everything is draped in oil.”

Curacao-based journalist Dick Drayer, who covers the Netherlands Antilles for Dutch television, estimated that the spill covers an area “of around 30 soccer fields.” He added that three distinct oil slicks are floating offshore and are “threatening the southern coast of Curacao.”

Photographs of Curacao’s southern Jan Kok area show a darkened coast and gobs of oil dripping off of coastline rocks and mixing in the surf. Oil-smudged flamingos, crustaceans, and lizards can be seen struggling on the wind-swept reserve of salt flats.

Van Leeuwen said the spill started threatening wildlife sometime last week but cleanup efforts by the company only recently got under way at the nature reserve, no more than 1,000 meters away from big tanks where Petroleos de Venezuela SA stores thousands of gallons of crude oil.

“A lot of time has gone by without any action. It’s been about one week before somebody at the company has done anything at all,” he said, adding that workmen are now excavating holes on Jan Kok’s beach to capture the spilled oil and mix it with sand and soil in order to cart it away.

The Isla refinery is a sprawling expanse of metal pipes, chemical converters and concrete by Willemstad’s bay. For years, activists have complained about the thick haze of smoke that sometimes blankets the area around the refinery, which can produce roughly 220,000 barrels a day.

Jacintha Constancia, Curacao’s minister of public health, environment and nature, also did not answer calls on Monday to explain what the government was doing about the spill or to prevent future accidents.

Nena Sanchez, a painter and former “Miss Curacao” who runs a plantation house and art studio on a hillside just above the Jan Kok salt flats, described the oil spill as “definitely extensive.”

“We’re very, very upset about the whole deal. We don’t know if the damage is so bad that the flamingos will go somewhere else because there is nothing left to eat here,” Sanchez said from her cactus-studded retreat above Jan Kok.

Curacao dive shop operator Ingrid Van Den Bosch said she has seen no evidence that the island’s world-class diving sites have been impacted by the spill.

For the original report go to http://abcnews.go.com/International/wireStory/oil-spill-fouls-curacao-shore-threatens-flamingos-17090050#.UD1NK2jGW5M