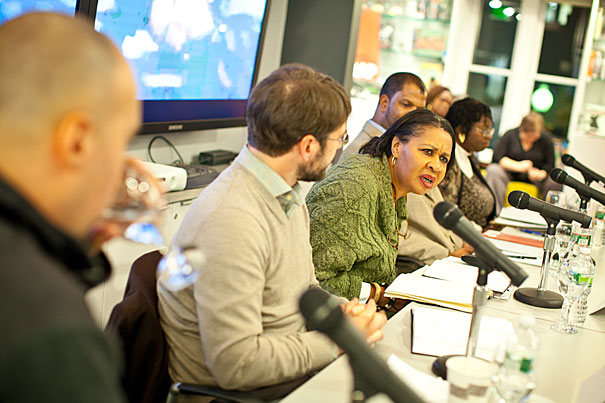 Los Angeles Times Editor-in-Chief Davan Maharaj will open the 36th annual Writers Week at the University of California, Riverside on Feb. 4, 2013, in a lecture addressing the battle to save journalism, Bettye Miller reports for UCR Today.
Award-winning authors Jamaica Kincaid, Jayne Ann Phillips and David Shields will headline a cast of noted writers who will participate in panel discussions and readings during Southern California’s longest-running, free event devoted to writing and writers. Writers Week regularly attracts seasoned authors and those just beginning their careers.
Maharaj, who was named editor of the Los Angeles Times in December 2011, will deliver the 45th Hays Press-Enterprise Lecture, a series devoted to addressing issues in journalism and the media that was begun in 1966 by the late Howard H (Tim) Hays when he was editor of The Press-Enterprise newspaper.
Kincaid has won numerous awards for her writing, including the Lannan Literary Award for Fiction, the Prix Femina Étranger, the Anisfield-Wolf Book Award and the Lila Wallace-Reader’s Digest Award. Her first book, “At the Bottom of the River” (1983), won the Morton Dauwen Zabel Award of the American Academy of Arts and Letters and was nominated for the PEN/Faulkner Award for Fiction. Among her other books are “Annie John,” “A Small Place,” “Lucy,” “My Garden” and “Mr. Potter.” Her stories have appeared in The New Yorker, Rolling Stone and Paris Review. Kincaid is a professor of literature at Claremont McKenna College.
Phillips wrote her first book, “Black Tickets,” when she was 26. The collection of stories, published in 1979, won the prestigious Sue Kaufman Prize for First Fiction. Her novels include “Machine Dreams,” nominated for the National Book Critics Circle Award and named one of the 12 Best Books of the Year (1984) by the New York Times Book Review; “Shelter,” winner of an Academy Award in Literature from the American Academy and Institute of Arts and Letters, and named one of the Best Books of the Year (1994) by Publishers Weekly; and “MotherKind.” She is a professor of English and director of the Master of Fine Arts program at Rutgers-Newark, the State University of New Jersey.
Shields is the author of 12 books, among them: “Jeff, One Lonely Guy,” which was co-written by Jeff Ragsdale and Michael Logan; “Reality Hunger: A Manifesto,” named one of the best books of 2010 by more than 30 publications; “The Thing About Life Is That One Day You’ll Be Dead,” a New York Times bestseller; “Black Planet: Facing Race during an NBA Season,” a finalist for the National Book Critics Circle Award; “Remote: Reflections on Life in the Shadow of Celebrity,” winner of the PEN/Revson Award; and “Dead Languages: A Novel,” winner of the PEN Syndicated Fiction Award. He is the Milliman Distinguished Writer-in-Residence at the University of Washington.
Also scheduled to participate in Writers Week are: science fiction author Nalo Hopkinson, associate professor of creative writing at UC Riverside; Héctor Tobar, Los Angeles Times columnist and novelist; Patricia Hampl, critically acclaimed poet and memoirist; Rubén Martínez, nonfiction writer, poet and documentarian; Wanda Coleman, poet; Jacqueline Berger, poet; Sheila Sanderson, poet; and Christopher Buckley, poet and professor of creative writing at UCR.
UC Riverside has the only undergraduate creative writing program in the University of California and offers a Master of Fine Arts in creative writing and writing for the performing arts.
For more information contact Writers Week director Tom Lutz at tom.lutz@ucr.edu. Lutz is a professor of creative writing at UC Riverside and creator, editor-in-chief and publisher of the Los Angeles Review of Books, an online, nonprofit, multimedia literary and cultural arts magazine.
For the original report go to http://ucrtoday.ucr.edu/8500