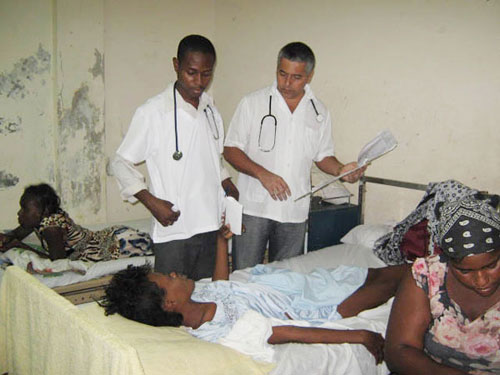 A new group of Haitian youths will take medical courses in Cuba in the 2012-2013 school year as part of a bilateral education agreement between Havana and Port-au Prince, under which over 800 Haitians have already graduated as medical doctors.

The group, which is made up of ten students that will take their courses at the University of Medical Sciences in eastern Santiago de Cuba province, shared views during a recent meeting with Cuban officials and members of the Cuban Medical Brigade at the island’s diplomatic mission in Haiti.

During the gathering, the vice-director of the medical brigade doctor Alejo Sagol explained the youths about the work of Cuban doctors in Haiti and congratulated them for having picked such a noble profession, which is badly needed in their country. “This is a very important profession for Haiti. You undoubtedly are part of the future and we have the task to help you work as professionals at community hospitals throughout the country, so that you progressively replace the Cuban personnel here,” the doctor said. Haitian medical student Louis Jhonny, who is currently on his third year of biochemistry at the Camaguey University, told the youths about his experience at the Cuban university.

Every year, the Santiago de Cuba Medical School includes in its registration youths from all Haitian regions. The selection of the youths takes a group of exams. Once the students graduate as medical doctors, they are assigned to health institutions in their own regions, said the head of the Medical Training Office at the Haitian Health Ministry Margaret Sanon.