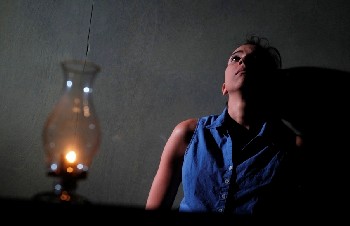 UM’s Ring Theatre and the Department of Modern Languages and Literatures, in association with FUNDarte are the masterminds behind the festival, which marks the centenary of the birth of Piñera (1912-1979). However, the plays are produced by a combination of national and international companies, in addition to UM’s Department of Theatre Arts. The diverse production companies, hailing from the USA, Cuba, and Spain, have banded together under one festival to celebrate the life and works of Piñera.

“If any place should host a tribute to Virgilio Piñera, it should be here in Miami, where theatres and organizations have been supporting his work for decades,” said Lillian Manzor, Associate Professor in Modern Languages and Director of Cuban Theatre Digital Archive at University of Miami. Manzor co-organized “Absurd Celebration” with her colleague Henry Fonte, Chair of Theatre Arts at UM.

A proper tribute to the playwright is well-deserved and way overdue. As an eccentric artist and open homosexual, Piñera didn’t get much love from the conservative Cuban milieu in his day, despite his groundbreaking work. Since his death he has morphed into a symbol for artistic freedom, and is credited with having brought modernism to Latin American theatre and for being the father of the theatre of the absurd.

So what’s the theatre of the absurd, anyways?

“It’s playing with words; it’s non-sensical dialogues; it’s putting characters in out-of-the- ordinary situations. It’s daily life made strange,” explained Manzor. “Things are not as they seem. A chair could become a brush, and a brush could become a mirror.”

Sounds like anything could happen. Manzor explained that the weekend’s debut play, Aire Frío, is more of a realist piece, but assured that there will be plenty of absurd moments to come in the following weeks. Aire Frío follows the Romaguera family through 20 years of economic struggle and frustrated dreams. Internationally renowned Cuban director Carlos Celdrán will make his U.S. debut on Friday at the play’s opening.

The schedule for the five plays, and their associated production companies, are as follows:

For the original report go to http://blogs.miaminewtimes.com/cultist/2012/08/university_of_miami_stages_abs.php