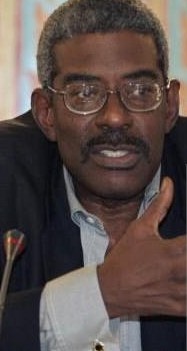 His daughter, Cathy Hughes, confirmed that he died in NYU Hospital, New York around 6:20 PM.

He is survived by his wife and five children.

He was a former General Manager of the now defunct Guyana Broadcasting Service (GBS).

Cholmondeley was also a former Media Consultant for the Guyana Elections Commission (GECOM). During political unrest in Guyana several years ago, he had been engaged in shuttle diplomacy between the government and the then main opposition Peoples National Congress Reform (PNCR).

He worked in Somalia as Coordinator for humanitarian aid and rehabilitation.

Back in 2010, he led a Caricom mission to observe Trinidad and Tobago’s general election.

Cholmondeley retired as a Director at the United Nations Development Programme based in New York, following a period of duty with the United Nations Educational Scientific and Cultural Organisation (UNESCO) representative to the Caribbean.

He opened the UNESCO Caribbean office in 1980 and was highly instrumental in the establishment of a number of Caricom generated media institutions such as the Caribbean Broadcasting Union, Caribbean Institute of Media and Communications (CARIMAC) at the University of the West Indies, the Caribbean News Agency (CANA) among other items.

For the original report go to http://www.demerarawaves.com/index.php/201208114368/Latest/veteran-broadcaster-hugh-cholmondeley-dies.html