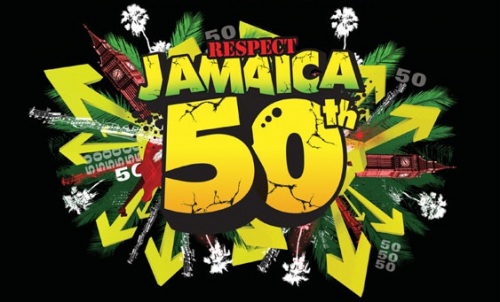 Shrugging off economic hardships and high crime, people across Jamaica proudly wore the national colors of gold, black and green Monday to mark the Caribbean island’s 50th anniversary of independence from Britain, the Associated Press reports.

Telephone poles and streetlights were wrapped in the flag’s colors across the scenic island of less than 3 million inhabitants. In the capital of Kingston, revelers wore shirts emblazoned with Jamaica’s name as they thronged a “golden jubilee village” showcasing the country’s history, food and culture.

On the grounds of the national stadium, displays paid tribute to prominent islanders like black nationalist leader Marcus Garvey and reggae icon Bob Marley. The air filled with the smell of sizzling jerk chicken cooked in severed oil drums.

By Monday evening, thousands of Jamaicans gathered inside the stadium to watch military marching bands, gospel choirs and homegrown ska, rocksteady and reggae music. South Africa President Jacob Zuma, former U.S. Secretary of State Colin Powell and Nation of Islam leader Louis Farrakhan were among the dignitaries at the festivities.

The celebration came a day after Jamaican sprinters Usain Bolt and Yohan Blake thrilled the island by winning the gold and silver medals in the 100-meter dash at the London Olympics. Jamaican Shelly-Ann Fraser-Pryce won her second consecutive Olympic title in the women’s 100 meters Saturday to start off a historic weekend for her homeland.

Prime Minister Portia Simpson Miller, who wants her Commonwealth country to sever some ties with the British monarchy so it can turn the page on its colonial past, made a special point to thank the nation’s athletes.

“My fellow Jamaicans, across the city of London, with every stride that they made, our Jamaican spirits soared. With every jump high or long, we heard a proud Jamaican roar,” said Simpson Miller, the country’s first female leader.

But Monday’s anniversary was not a reason for everyone to cheer. Some islanders, especially older Jamaicans who still long for the days of stability under British rule, argue that Jamaica has clearly fallen behind in the five decades since it achieved independence, largely due to political mismanagement by the two main political parties.

“Without all the ‘politricks’ from the parties we’d be a lot better off in this country,” said Fitzroy Reid, a clothes vendor.

Opposition leader Andrew Holness said Jamaicans should be proud of their heritage but added that the country needs to do some serious soul-searching to confront its many challenges.

“We must accept that the quality of life of many Jamaicans remains at unacceptable levels. The images of poverty are very disturbing. Corruption and inefficiency are almost institutionalized in the society,” Holness said in an independence day statement.

Jamaica came under British control in 1655 when it was captured from the Spanish. The colony was mainly used to produce sugar, relying heavily on the work of African slaves until emancipation in 1838.

Over the next century, Britain invested in infrastructure, but was criticized for repression of black activists who rebelled over high food prices and poor treatment.

Jamaica moved toward independence in the 1940s, when Britain enacted policies to give its Caribbean colonies greater economic and political autonomy.

At midnight on Aug. 6, 1962, in the national stadium, the flag of the British empire was lowered for the final time and replaced by the gold, black and green Jamaican flag that flies today.

Since then, the island has become a hothouse for world-class athletes and musicians, even while struggling with intermittent political violence and other difficulties.

One thought on “Jamaica marks 50th anniversary of independence”