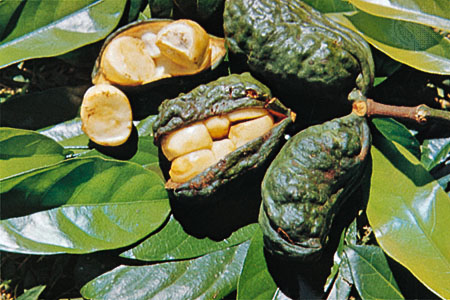 The Jamaica Observer reports that Jamaican scientist and executive chairman of Bio-Tech R&D Institute (BTI) Dr. Henry Lowe, has formulated an energy sports drink and a fortified porridge made from sweet potato and yam, which he intends to debut in August at this year’s Olympics in London. The two products — the Jamaica gold sports drink and the premier power porridge — have already been trademarked and patented, and will be primarily targeted towards an international market. Apart from yellow yam and sweet potato, the energy drink will also have the bissy (kola nut; shown above) as one of its major ingredients to enhance metabolism for sporting prowess.

[. . .] Deputy chief executive officer for the BTI, Charlene Ashley, said that while her organisation would be seeking to secure 75 per cent of sale from the international market, it would be launching both products locally at the end of August. She said the BTI has already started to target and sensitise representatives from more than 400 supermarkets so that the products can be easily available to local consumers.

Dr Lowe said the idea to formulate the products was inspired by president of the University of Technology Professor Errol Morrison, who has done extensive research on why Jamaicans run so fast. The professor has consistently attributed the prowess of local athletes to the consumption of staple crops such as yam and green bananas, and was one of the authors of the book Jamaican Gold: Jamaican Sprinters, which was launched in 2010. The book, which is sold in bookstores worldwide, sought to explore some of the factors behind the success of Jamaican athletes such as Usain Bolt and Shelly-Ann Fraser.

Dr Lowe said his group has been working on the products for the past nine months, and had utilised the expertise of a nutritionist in formulating them. “We have taken a lot of time looking at the formulation. We have actually used the Jamaican herb as the major ingredient that is going to replenish all the salts and the waters that our athletes and persons that want to excel are going to be using, as well as to give energy,” he said.

Since its inception in 2010, the BTI has manufactured a line of nine nutraceutical products and five medicinal teas and tea blends based on extensive research. The institute was founded by Dr Lowe and a team of scientists, and has primarily focused on researching and developing comercialised pharmaceuticals and nutraceuticals from indigenous plants.