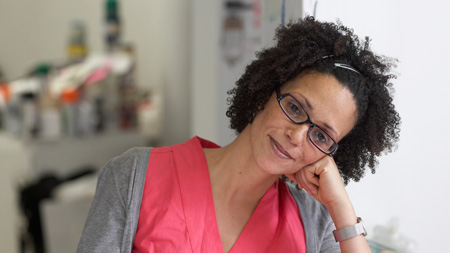 Via The Huffington Post, I found an interesting new website that profiles New York’s mothers of color, mater mea, and a fascinating article on Cuban-American performance artist and art professor Coco Fusco:

It seems like once or twice a year the Internet experiences a gender studies firestorm in the form of a lengthy article asking a seemingly simple question: Can women really have it all? On a bright June afternoon in a Clinton Hill neighborhood park, Coco Fusco — performance artist and an associate professor of Fine Arts at Parsons The New School for Design — is just one of the sea of moms juggling the child portion of “it all” that day. Her son Aurelio bounces from wooden table to table, eagerly awaiting his friends’ arrival at his seventh birthday party, as Fusco cuts slices of watermelon and opens up 12-packs of bottled water to keep the expected 15-20 parents and kids cool in the blazing sun. [. . .] It would be easy — comforting almost — to say that Fusco is an example of a woman who has it all. Healthy and happy son? Check. A high-power position in her field of choice? Check. But ask Fusco what she thinks, if she really believes women can have it all, and the professor lays it all out there.

“People get really defensive about it, but I actually think she’s right,” Fusco says, referencing the latest addition to the conversation, The Atlantic’s July 2012 feature “Why Women Still Can’t Have It All.” (The article was written by a woman who left her powerful history-making job at the U.S. State Department to be with her family when her teenaged son began acting out.) “I’m not going to tell you it’s easy. This has been the hardest thing I’ve ever done in my life.”

[. . .] Fusco, 52, adopted Aurelio when she was 45 years old, after spending a good chunk of her life devoted to higher education — she has a Masters from Stanford and a Ph.D from Middlesex University — and her art (a mix of performance and video installation pieces, which look at concepts as varied as language, race and the idea of how human beings interact or exist online and in public spaces). “I imagined myself having children at some point in my life from when I was very young, but I also had a very strong desire to finish my education and develop myself professionally,” Fusco explains. “I didn’t want to stop doing that in order to have children. “I’m not the most conventional person in the world,” she continues. “I just didn’t see myself in a traditional marriage scenario. When I was about 40 or so, I thought ‘Ok, I guess I better put some serious effort into the child thing.’”

Fusco contacted New York’s Spence-Chapin Adoption Services and went through a rigorous vetting process for a year to ensure she was both a good potential candidate and ready to be a mom. “You really have to look at yourself very carefully and understand what’s involved and what the particular challenges are before you can begin to … make yourself available as a candidate,” Fusco says. After a few meetings with Aurelio’s biological mother, Fusco got word that her son would be going home with her — in two weeks. 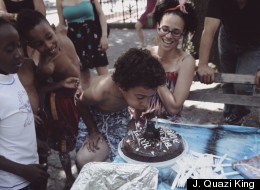 Despite the frenzy around jumping from working woman to working mom in 14 days, Aurelio’s arrival in the summer of 2005 was “a beautiful encounter,” Fusco says. “I was really lucky.” While friends warned her that the first three years would be the hardest part of mothering, Fusco felt the complete opposite, thanks to a year off from work for a sabbatical and maternity leave. Mother and son traveled around the world that first year, and “even though he was physically needy, it was really easy to care for him,” Fusco says. “He could adapt to anything that I had imposed. I put him a stroller, he would go to sleep. I would feed him anywhere, change him anywhere. I even gave lectures while holding him on a hip. “We were able to spend a lot of time together and bond,” she says.

For more on Fusco, see http://www.newschool.edu/parsons/profiles.aspx?id=42745 and her artist’s page http://www.thing.net/~cocofusco/