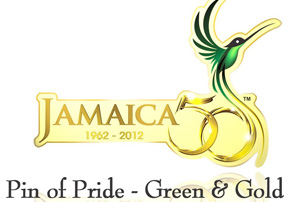 The OMP Initiative rallied one million Jamaicans to begin a tradition of passing down this memorabilia from generation to generation.

Jamaica 50 Project Director, Robert Bryan said that there is significant interest in the pins, with more than 45,000 already per-ordered.

Each pin will be sold for $700 and will be available at the official Jamaica 50 Shop at the Grandstand, National Stadium, for the duration of the trials, which end on July 1, and at the Things Jamaican stores as of July 6.

Prime Minister, the Most Hon. Portia Simpson Miller, who spoke at the opening ceremony of the trials, received her pin at the event.