Actress and ocean activist Kate Walsh (well-known for her role as Dr. Addison in Grey’s Anatomy and Private Practice) spent time earlier this month in Belize for the observance of World Oceans Day (June 8, 2012), joining the global effort to conserve the oceans and expressing her support of Oceana’s conservation projects in the country and around the world. She experienced Belize’s marine biodiversity first-hand as part of her campaign to spread awareness to protect the world’s oceans. See excerpts with a link to the full article below:

During the course of her six-day visit, Kate journeyed to numerous sites important to Belize’s environment, tourism, and economy. She snorkeled at the Hol Chan Marine Reserve and Shark Ray Alley which are popular tourist attractions and conservation sites. She also travelled to Lighthouse Atoll, where she visited two of Belize’s natural monuments, the Blue Hole, which she also snorkeled, and Half Moon Caye.

Along the way, Kate learned many interesting things about Belize’s Barrier Reef and the current risks facing Belizean waters. She communicated these facts to over 200,000 of her “followers” on Twitter to further spread word about Belize’s precious sea. First, she exclaims her wonder at the reef, tweeting “Belize’s barrier reef is amazing! Did u know it’s the 2nd largest reef in the world?” While she expresses her awe, however, she also raises concern for the reef. She tells her “followers” that “Belize’s reef is too precious to risk with offshore drilling.” 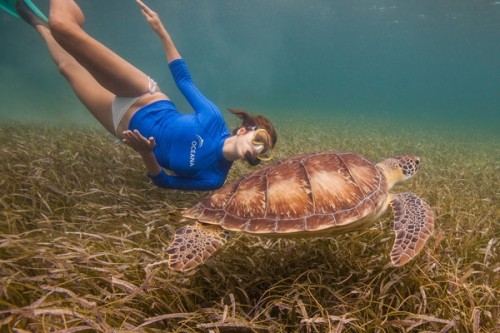 With Kate directly expressing her admiration and her worry about the Belize Barrier Reef, it is clear that Belize has made a great impression upon her. [. . .] In addition, the actress applauded Belize’s natural reserves saying, “One of the things that is really impressive about Belize is all of these protected areas […] you get to see this vast plethora of not only coral and reef life, but all of the animals that go with it; things that I have never seen before.”

Audrey Matura-Shepherd, VP of Oceana in Belize, accompanied Walsh on almost every step of her trip and was grateful for Kate’s work. “I am pleased that she came and highlighted Oceana’s work internationally,” said Matura-Shepherd. “But more importantly, I am happy that she showed the world that Belize does indeed have treasures in its sea that we need to protect.”

For more on Oceana, see http://oceana.org/en/ca/about-us/what-we-do

One thought on “In Belize, Kate Walsh Expresses Concern about Offshore Drilling and Reef Health”