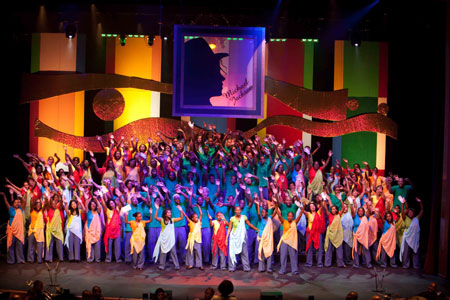 Twenty-five years after the BP Marionettes’ first offering of A Gift to the Nation—commemorating the 25th anniversary of Trinidad & Tobago’s independence in 1987—the Marionettes’ three choirs and bpTT commemorate Trinidad & Tobago’s 50th anniversary with A Gift to the Nation II at Queen’s Hall on July 14 and 15. The programme features the Caribbean premiere of Karl Jenkins’ new contemporary classic, The Armed Man (A Mass for Peace). This multi-media and multi-cultural work—commissioned for the UK’s Millennium celebrations—is particularly distinctive for its inclusion of multicultural literary, musical and visual elements, including a film developed exclusively for the work.The group’s Music Festival Winners, including members of the Marionettes’ new Children’s Choir, will take centre stage with their winning performances. There will also be a tribute to Whitney Houston. The production team includes Enrique Ali, Jane Carter, Leslie Clement, Desmond Waithe, Margaret Sheppard, Noble Douglas, Dave Williams, Randy Halfhide, Celia Wells, and Franklin Agarrat. This year also marks 40 years of partnership between the Marionettes and primary sponsors bpTT. Proceeds from A Gift to the Nation II go toward the Marionettes Property Fund, and the construction of Helios Hall, a secure rehearsal, storage and performance space for the group that it hopes to share with the national artistic community. Tickets are available from the Marionettes (e-mail@marionetteschorale.com or 868-790-1751), online at http://www.marionetteschorale.com, and at the Queen’s Hall Box Office (tel: 868-624-1284).

For the original report go to http://www.guardian.co.tt/lifestyle/2012-06-24/marionettes-and-bptt-offer-gift-nation