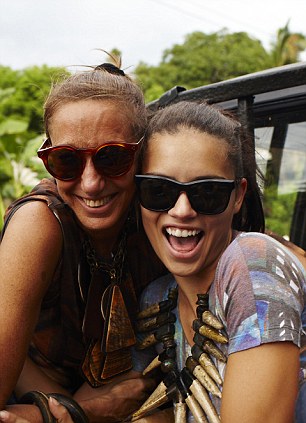 Jane Gordon has written this profile of Donna Karan and her relationship to Haiti for London’s Daily Mail.

Donna Karan is reclining on a pure white ottoman in the shade of a banyan tree at her aptly named villa the Sanctuary on the private tropical island of Parrot Cay in the West Indies. She is, as you might expect, wearing something she designed herself (a copper-coloured draped skirt and tunic top) and she manages to look (without any make-up or obvious signs of surgery) a decade younger than her 63 years – a feat she puts down to ‘standing on my head doing yoga’.

The woman who, together with her late husband Stephan Weiss, created a vast fashion empire worth a reputed £415 million (it was sold to the luxury conglomerate LVMH in 2001) is supposed to be on vacation, but even here she is a whirlwind of creativity. She is taking calls from her New York headquarters about her latest collection (she remains the chief designer of Donna Karan International) while simultaneously giving YOU an exclusive interview and looking after two of her grandchildren who are with her during their school holidays.

Warm, funny and endearingly eccentric, she is a stream of seemingly unconnected ideas. She talks about everything from her ‘journeys’ to discovering alternative health therapies – she once travelled to Switzerland with her good friend Demi Moore to be treated with leeches – to the eternal problem of the work-life balance. Her abiding guilt is that she didn’t spend more time with her daughter Gabrielle, now 38, from her first marriage to Mark Karan, when she was growing up.

‘I always thought I should have been a better mother. My daughter Gabby very kindly once said that she thinks I was a better mother because I was doing a job I loved,’ she says. ‘I now think guilt is a universal part of being a mother. I used to think it was Jewish-mother guilt but now I think it is working-mother guilt. I still suffer from it with my grandchildren – that’s why I try to take time off to be with them here on Parrot Cay during their school breaks,’ she says.

Donna bought the land on which her villa now stands as a present for her husband when the couple renewed their marriage vows on a holiday on the island during Christmas 2000 (he bought her, 17 years after their marriage, an engagement ring). Six months later, after a seven-year fight, Stephan, 62, died of lung cancer. Overwhelmed by grief, it took Donna five years to fulfil her promise to him to create a holiday home where their family – Lisa and Corey from Stephan’s previous marriage, Donna’s daughter Gabby and their combined seven grandchildren – could be together.

‘Stephan was my rock. He handled everything. When he died my life completely changed – half of me was no longer here,’ she says, her voice becoming fleetingly sombre before she switches key and talks about how his long illness and his eventual death inspired her to create the Urban Zen Foundation.

Initially intended to raise money to support causes she is passionate about – introducing alternative therapies into the American healthcare system, empowering children and preserving cultures in ‘the face of globalisation’ – the Urban Zen concept now includes three uber-cool retail outlets (Madonna and Gwyneth Paltrow are regulars). The three shops – two in New York, one in LA and another, she hopes, to open soon in London – sell a range of clothes, accessories and bits for the home. Ten per cent of the profits go to the Foundation.

Since 2010 much of Donna’s philanthropic work – and a big part of her creative inspiration – has centred on helping the people of Haiti following the catastrophic earthquake that devastated the country killing an estimated 300,000 and leaving 1.5 million people homeless. Donna has helped the artisans of Haiti to develop their businesses – she sells a range of local products (sculpture, bags, metalwork) in her Urban Zen stores and 100 per cent of the profit from the Haitian products is returned to the projects in Haiti.

‘I truly believe that philanthropy and commerce can work together. I think it’s the only model that makes sense now. Raising money through charity can only help so much in situations like Haiti. There is so much talent in that country and I believe that the artisans’ exports could be a huge factor in Haiti’s economic recovery. Haitian artists, particularly Philippe Dodard, have heavily influenced my collection,’ she says. Indeed Haiti, for Donna, has offered such visual stimulation that you sense it has given new life and renewed enthusiasm to her work as a designer.

Donna grew up with fashion. She lived in Long Island, New York, with her mother Helen, a model, and her stepfather Harold Flaxman, who worked in the fashion industry – her father, a tailor, died when she was three. She began her career as an assistant designer with Anne Klein in the late 1960s, then left in 1984 and created her first women’s collection in 1985 with the remit ‘to create modern clothes for modern people’. ‘When I started Donna Karan people weren’t really accepting the idea of the working woman. Women in the workplace were dressing like men, and I said, “Let’s celebrate our bodies – our bodies are different.” I suppose you could say I was the initial inspiration for what people now refer to as bodycon when I created my “seven easy pieces” concept, which was seven items that were intended to mix and match with each other and to make women look like women, accentuating our curves.’

Unlike many male designers, Donna’s fashion philosophy has always been about celebrating the female shape, and she chose Brazilian supermodel and Victoria’s Secret Angel Adriana Lima to model her spring/summer collection, which was shot in Jacmel, Haiti. ‘I thought, “Let’s show people how fantastic this country is.” And just look at the picture of Adriana wearing the purple one-shoulder dress – that’s bodycon. And you know every woman should own a great bodycon dress,’ she says.

In such a long and celebrated career, Donna has made many famous friends (Demi, Gwyneth, Madonna, and so on), but her best friend remains Barbra Streisand. ‘She is like my sister. We are very alike. Except that I can’t sing and she can design clothes. She designs them and I make them for her,’ she says, laughing.

Bill Clinton is also one of the ‘greatest influences’ on Donna’s life. She became his fashion consultant when he announced his candidacy for president in 1991, the year before his reputation was knocked by allegations of an affair and Vietnam draft dodging.

‘Everybody in America thought I came from the other side of the moon, and once I got Donna’s clothes on, I had street cred in Washington,’ says the former president. ‘I think The New York Times said I had a new jazzy look – and that was the only good press I got for six months!’

There is no doubt that Donna’s strong friendship network and her work with her Foundation has done much to heal the grief of losing Stephan – their relationship, she says, was ‘bells and whistles’ from the instant they met. She misses, though, the intimacy of marriage and would not rule out marrying again. ‘But I have very specific taste in men: I like them artistic-looking and gruff. I like them with long hair or completely bald. And I like men who travel, who ride motorbikes. I want to be on the back of the motorbike being taken for a ride. I hope I meet someone on my journey – it would be fun and I think life would be much easier. I would like to marry again, because I like having a partner in crime.’

Meanwhile, busier than ever, she has dozens of unfulfilled ambitions. ‘I’d kind of like to do a Paul Newman. I’d like to market my unbaked fruit and nut cookies like he did his sauces. It’s next on my list. I worry that the clock keeps ticking and I get nervous that I won’t be able to do what I need to. I am beginning to think I might have to come back in a second life,’ she says.

Central to her happiness in this life is her family. She is very close to her two stepchildren and their five children (her seven grandchildren range in age from seven to 24). Gabby – married to a former Alitalia pilot who now runs a private aviation company – is so close to her mother that she not only lives next door in New York, she also has a restaurant (Tutto Il Giorno) beside the Urban Zen retail store in Sag Harbour, Long Island. With Gabby busy in the US with her second restaurant, Donna is looking after her children, Stefania, nine (whom Donna calls her ‘mini me’), and Sebastiano, seven, who are now, as our interview comes to an end, demanding her attention.

‘My grandchildren are delicious. The older ones are very independent – I think they are sort of proud of me but they make fun of me a lot. They call me Grandma but they call me a lot of other things too! The younger ones are always saying to me, “Grandma, are you going to Haiti again?” It’s their school break now, so I’m staying here on the beach and playing with them. How lucky am I?’

For the original report go to http://www.dailymail.co.uk/home/you/article-2161545/Donna-Karans-love-Haiti-relationship.html#ixzz1yfoWqH9t