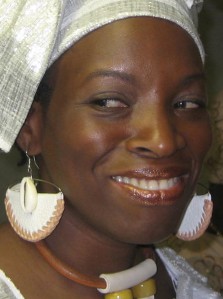 In an exclusive interview with When Steel Talks, Journalist, Writer and Theatrical Producer – Nandi Keyi shares her experiences, visions and overall thoughts on her latest production – “At the Feet of the Masters…” See link below to original report.

““At the Feet of the Masters” is beyond just an interview or conversation. It has truly been a spiritual experience, for with each master, the realization deepens that those among us who rise to iconic status, are called to something much bigger than themselves, and in obedience they have followed.” Nandi Keyi

WST – Tell us all about yourself.

Nandi – My name is Nandi Keyi. I was born in London, England. Like many children of first generation Caribbean immigrants scratching out a living in 1960’s England, I was dispatched to live “back home” at 5, when life in the “mother country” proved too harsh for my father who, by then, was raising me alone. I grew up in Point Fortin with my father’s sister and in those 11 years, culturally, I became a “Trini.” At 16, I joined my father, who had settled in Toronto, Canada, where I finished high school and attended York University. Growing up I had always enjoyed reading. As a teenager, I spent my free time in Toronto Public Library reading books by Caribbean and African authors. With a love for reading usually comes an inclination or obligation to write. So what began as a student internship with community newspaper Share during college morphed into a journalism career. On a freelance basis, my work also appeared in mainstream publications such as The Toronto Star, Maclean’s Magazine and Now Magazine. I also did a regular radio show on CBC, and some television work. I had a parallel career in constituency and communications with the federal Minister of National Defense and International Trade. My interest in theater also peaked at this time. I sat on various arts boards and grant juries. My play ‘Man-U-Mus’ won a national honor and was anthologized by the Playwrights Union of Canada. I became heavily involved in arts advocacy, even as I produced and wrote theater; I sat on the Caribana board. Later, I left for the United States, where I graduated from the City University of New York, continued producing theater, published scholarly writing and attracted various book editing projects. As far as my writing on Caribbean themes go: I am lead essayist and editor of “The Progress of Winsford Devine: a Collection of Caribbean Lyrics.” My debut novel “The True Nanny Diaries” was published in 2009.

WST – What is “At the Feet of the Masters” series about?

Nandi – “At the Feet of the Masters” is a series of live conversations with icons of Trinidad and Tobago’s culture. To date, we have sat down with master artist David Moore, calypso master Dr. Slinger Francisco – Mighty Sparrow, and steelpan master innovator Dr. Ellie Mannette. Still to come on June 22, 2012 is master producer and businessman Rawlston Charles better known as “Charlie”, and master promoter Flag Woman Janet Lewis whose conversation will take place on June 29, 2012. Every Friday in June, we meet at the beautiful Tropical Paradise Ballroom at 1367 Utica Avenue, in Brooklyn, New York and talk with a cultural master; actually it’s more like the masters talk and we, the audience, ask questions and listen. Through this process, we garner insight into lives that have been lived beyond the ordinary. Our masters – and elders – are people who have led or opened the way that others may follow. We hear of their passion, pain, pride – and rewards: if any.

The intent is that in some way our patrons, especially the youth, will be inspired and transformed. Last week, a young female pan player asked Dr. Mannette if she could play his pan. He happily obliged to admiring murmurs of “yes, girl play de master pan” from onlookers. Dr. Mannette said, “But look the child could play!” You should have seen the look on her face at this praise! It was clear that she would never be the same again. “At the Feet of the Masters” is beyond just an interview or conversation. It has truly been a spiritual experience, for with each master the realization deepens that those among us who rise to iconic status, are called to something much bigger than themselves, and in obedience they have followed. This series has proven to be a master class where others may be inspired. It is truly a different look at people who we believe we “know.” The beautiful thing is that really we do not know what to expect from week to week – though there is an established format, the event takes on the energy of the master.

Nandi – This was not something I sat and thought about. It just came – spirit–led. It makes sense that this is occurring during New York’s Caribbean Heritage Month and Trinidad and Tobago’s 50th anniversary of independence. There is really never a more important time to set things in motion than “now.” Now is certainly always the right time to honor those who have lead the way, developed culture and given so much of themselves through their art.

WST – How was the choice of who would be featured in the series, gone about?

Nandi – We wanted to include as many aspects of the culture as possible, and feature icons from the crème de la crème of the cultural realm. And it all fell into place! Who is more iconic than the Mighty Sparrow, Dr. Ellie Mannette, artist David Moore, Rawlston “Charlie” Charles, and Brooklyn’s own promoting legend Flag Woman Janet Lewis? Clearly, these are premiere cultural innovators and masters. As a writer, I would have loved to feature a master writer. Even the panelists who guide the weekly interviews are masters in their own right. Our panel of three includes pioneering broadcasters Dave Elcock, Eric St. Bernard and the international photojournalist Collin “Soulboy” Williams.

WST – Have you ever undertaken an initiative like this before?

Nandi – “No! I reiterate this was not my doing; I feel that this was spirit-led – my husband and I simply moved on inspiration. Had we been led by our heads and not hearts, we probably wouldn’t have followed through or would have stopped after the first day. We know we must see it to the end. I still draw on my experience producing other events – like theater – but everything about this is different.”

WST – How has the series been going so far, has the public and/or your target audience demonstrated an understanding of the importance of, and opportunity provided by, this series?

Nandi – “Creatively and spiritually it has been an amazing experience. I received a text from Eric St. Bernard, after Dr. Mannette’s segment, which read: “Thirty years of broadcasting and never anything as memorable as last night, thank you.” That right there encapsulates all that we have been experiencing from the beginning. We have a handful of people who have been following the series from the beginning. Those who have come out absolutely understand the opportunity and value they derive.”

WST – What are some of the challenges, if any, you have encountered along the way?

Nandi – “There are two challenges: attracting sponsorship and growing the audience. These have been our only challenges – and the biggest ones you could face as a producer. Our community often needs nursing (requiring big budget advertising) to support events that are outside of the orbit of barb-be-que, curry-que, lime, fete, party, mas camp and general wine-jam-cook-out. This is especially true in the summer, which is understandable, as most people want to be outdoors. As I discuss the series, I don’t know how many times I have heard, “what dey coming to talk about so.” In these minds the thought process is, “it’s only Sparrow.” One young upstart promoter even had the nerve to tell me that next time she will get me real masters. Despite the challenges would we do it again? Absolutely. Of course, with more emphasis on sponsorship and expanding the target audience beyond our own natural community.

WST – What has been the feedback thus far from ‘The Masters’ themselves who have already been featured in the series?

Nandi – “David Moore while sitting outside awaiting his grand entrance/procession into the ballroom had a glimpse of what we, the producers, felt was a sparse audience and exclaimed: “Are all those people here to see me?” During the interview he said that notwithstanding the fact that his pictures hang in almost every Caribbean home, no one knows who he is. “Everybody thinks I am dead,” he said. Now he says after years of solitude [in which he derives no income from his famous early pieces] he is energized by new interest in his work that has occurred because of the series. We continue to display his art during the series and now I have arranged for his originals to be included as part of the Borough of Brooklyn’s official Caribbean Week festivities.

The Mighty Sparrow’s reaction was all over the map. When he entered the venue, he seemed frail, provoking the question in our minds whether he was up to the task. Gone was the enthusiasm with which he had first embraced the idea. As producers we held a collective breath. As soon as he tested that mike, and proceeded down the aisle he underwent a complete transformation. As the segment proceeded, he sank deeper into the conversation. He was deeply reflective in his approach and would say, “I shouldn’t be saying this but just edit the tape.” His daughter, Karen Francisco, who gave him a rousing introduction, told me later that though she had heard some of her father’s stories before, that night through “At the Feet of the Masters,” she got the fullness of pivotal moments in his life, particularly, the true events that inspired the song “Ten to One is Murder.” The next day, I spoke to the Mighty Sparrow and he told me how impressed he was by the forum. He said that he had never done anything like that before! And when you have lived a life like the Mighty Sparrow that is a welcome statement.

We had the opportunity to spend time with Dr. Mannette the day he left New York and he was very joyful and anxious to return to New York. He felt his experience with “At the Feet of the Masters” was a memorable one as he always relishes the opportunity to speak with a “home” audience about his life and work. Both him and his business partner Kaethe George were impressed by the intimacy of the setting, the warmness of the environment and the interest in his work. In particular, Kaethe noted that this was an important gathering for Dr. Mannette, as it allowed him to spend time with his community as he celebrates 75 years as a steelpan innovator.”

Nandi – “We plan to continue what has been brought to us. Presently, we are looking for appropriate vehicles to disseminate the footage we have collected. The footage of Dr. Mannette’s segment in particular, is something that should be made widely available immediately across the length and breadth of Trinidad and Tobago. Sadly, viewing this footage should make citizens, rulers, and business class – weep. It is explosive! Everyone needs to see this!”