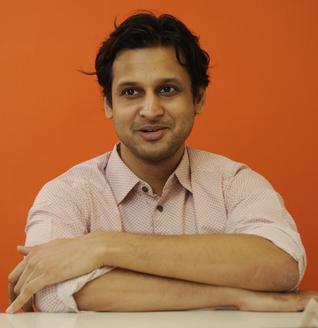 The Hindu interviews Rahul Bhattacharya about his Guyana novel, The Sly Company of People Who Care.

The novel details an Indian journalist’s travels through Guyana. He has previously authored “Pundits from Pakistan”, a book on the Indian cricket team’s tour of Pakistan in 2004.

Rahul Bhattacharya was recently awarded the Ondaatje Prize for his second book, “The Sly Company of People who Care”. The novel details an Indian journalist’s travels through Guyana. He has previously authored “Pundits from Pakistan”, a book on the Indian cricket team’s tour of Pakistan in 2004.

Congratulations on the Ondaatje Prize. Tell us a little bit about it.

Thank you. It is an award of the Royal Society of Literature in Britain, set up by Christopher Ondaatje, philanthropist and elder brother of Michael Ondaatje. It is awarded to a book that evokes the spirit of a place. Novels, travelogues, poems are all eligible for the Ondaatje Prize.

What does it mean to evoke the spirit of a place?

First you have to understand the place. Once that is done, you have to find the technique to render it and commit yourself to the craftsmanship of conveying this understanding. There are no rules. Some people have a project in mind, in my case it was a book of discovery.

Most people hear of Guyana only in the context of cricket. Is that what interested you in the place? Guyana?

Cricket was my gateway to Guyana. Like most other kids, I knew it as the place where Chanderpaul, Kanhai and Kallicharan come from. When I was a cricket reporter, the first country I landed in was Guyana. And a whole world opened up to me. And it was a part of the world that I knew so little of. And I was curious about its historical processes. That’s why I wanted to go back at some point.

With respect to colonialism, how were the historical processes in Guyana different from those in India?

They’re completely different. India is an ancient society that has seen wave after wave of colonisation. The effects of British rule are felt most profoundly because it’s the most immediate. Guyana and the West Indies were very scantily populated areas. The indigenous tribes were not found in great numbers. So when the colonisers landed, it was a virgin territory to them. And they used it as an offshore factory. So people were enslaved from Africa, India and China to make sugar. And, eventually, it became a society almost created by colonialism. In Guyana, more than 90 per cent of the population was displaced as a result — Africans who had Africa beaten out of them, Indians who had no memory of India. India wasn’t a colonial creation, whereas the West Indies almost was.

One of the chief delights of the book is its dialogue that almost wants to be read out aloud. Would you ever consider writing a play?

I don’t think so. I have had such a bad experience of watching drama in Bombay during my college days that I don’t have a feeling for drama anymore. But I do like dialogue.

Which of your books are you closer to?

It takes a while to look at a book with detached affection. I feel more affectionate towards “Pundits…” right now because I don’t think about it much now. I can take it for granted. “Sly Company…” is slightly raw right now, but hopefully in a few years I’ll have the same detachment from it.

For the original report go to http://www.thehindu.com/life-and-style/metroplus/article3509239.ece

2 thoughts on “Pundit from Guyana”