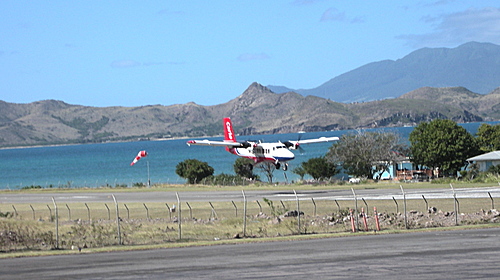 Hot and dusty, or so cold pilots can’t kill the engines – top travel writers tell of charming little airports across the world in this article from London’s Guardian. The article included two airports in the Caribbean. For the rest follow the ink to the original article below.
Nevis airport, Gary Buslik

My favourite airport is on Nevis, a tiny eastern Caribbean island. It’s not a shack any more. The terminal now has a separate customs room, so the agent, Reginald, can no longer chat it up with the ticket lady, Gloria. It also now has a little built-in snack booth, where Sandra sells potato chips, but this, too, is now out of chat range of her friends.

In the previous terminal, which was indeed a shack, Sandra would just set up her card table next to Gloria, and everyone could see and talk to everyone else, including Osgood the taxi driver, who liked Sandra, and who would hang out there gossiping and occasionally buying a bag of chips.

But the bureaucrats couldn’t leave it alone. In their wisdom, a few years ago they decided to assert their collective manhood by building a two-storey control tower – ridiculous on the face of it, considering there’s no other structure on the island taller than a goat – an expanded waiting and ticketing area, and a taxi-queuing area separated by a chain-link fence. Apparently they wanted a miniature version of New York’s JFK International.

But here’s what happened. Gloria, Sandra, Reginald, and Osgood the taxi driver will have no part of that stupid control tower, or the expanded terminal, or the separate rooms – let alone the chain-link fence. They all still coalesce like wispy clouds around a Caribbean sunset in what was the exact layout of the old terminal, and to hell with bureaucrats. And sometimes a goat or two will wander in and join the little group, and Osgood will share his potato chips, and a perceptive stranger can almost see the outline of the former terminal shack and remind himself why he’s here.
• Gary Buslik’s A Rotten Person Travels the Caribbean (Travelers Tales, £8.99) won the Benjamin Franklin travel book of the year award in 2009. His new novel is Akhmed and the Atomic Matzo Balls

We’re lounging. A pair of pelicans float past, then a vulture family. It’s a departure lounge where all airborne things are welcome. What seems amazing is that this is the capital city of Belize and we have three sofas outdoors under a sunshade next to a shimmering Caribbean lagoon. I love it. A local is talking to the pilot while we wait to fly to Ambergris Caye.

Straight – with an incredible Caribbean dipthong – means “fine”. And it is fine. The pilot invites us to amble over to the plane. Someone fetches one more passenger from the small ticket office; another has to be called from the green wooden shack that is the bar, the Take-Off Tavern. I can see no other facilities. The pilot and I discuss green issues. He reckons we are burning less fossil fuel than if we went by road and boat. We board. The pelicans and vultures politely flap to one side. We depart and are immediately flying over the turquoise sea.

• John Gimlette’s books include Wild Coast (Profile Books, £8.99) about his travels in Guyana

For the original report go to http://www.guardian.co.uk/travel/2012/jun/08/travel-writers-favourite-charming-airports?newsfeed=true