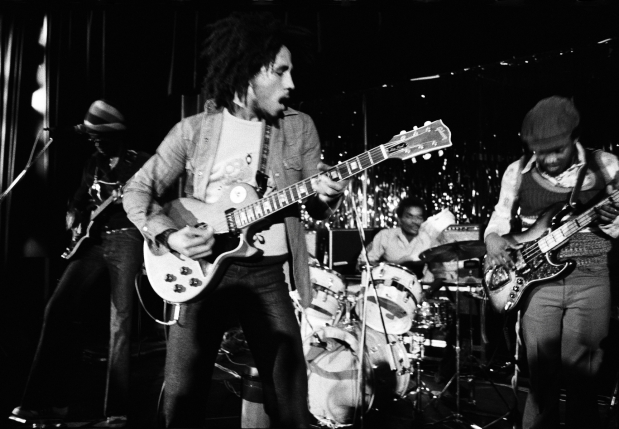 Reggae legend’s infectious sound and spirit catapulted him from Jamaica to the world stage, where he influenced musicians of all stripes. As Bernard Perusse reports in this article for Montreal’s Gazette, Marley helped expand the vocabulary of North American music, paving the way for hybrids of rock and global rhythms.

In this 10-part series, the Gazette pay tribute to the rock ’n’ roll-era visionaries who came up with the musical vocabulary we’re still hearing today – the ones without whom the language of rock ’n’ roll would not sound the same.

If one man made rock musicians start to see beyond the American blues and country-based framework from which their music evolved, and if a single figure began the process of expanding their vocabulary past even the European influences that marked post-Beatles art rock, it was surely Bob Marley.

If we now fully expect hybrids that mix rock with Third World rhythms, and if we have come to think of popular music’s language as something global, we owe Marley a debt of gratitude.

The Jamaican superstar was not necessarily the first to reach any specific destination. Records that can now be called reggae had been waxed before the Wailers first walked into Studio One in 1963. Desmond Dekker brought Jamaican rhythm to the crucial American market with Israelites, a Top 10 hit five years before Eric Clapton’s cover of I Shot the Sheriff first had mainstream rock fans in North America asking “Who is this Marley guy?” Nor was Marley a trailblazer for socially-conscious lyrics, which helped define his work.

He was, however, a rock-style star whose stature on the global stage was unprecedented for a Third World artist. And in the years since his death in 1981 at 36, it has only grown. The 1984 compilation Legend is the best-selling reggae album of all time, having found its way into 25 million homes around the world. The collection has been on the Billboard charts almost constantly since it was released. In 1999, Time Magazine ranked Exodus (1977) as the best album of the 20th century. Marley’s name recognition – at least when considered on a worldwide scale – rivals that of just about any rock ’n’ roll legend.

Marley’s music did not come out of a vacuum. He and fellow founding Wailers Peter Tosh and Bunny Wailer were heavily transformed by American R&B, soul and doo-wop records by the likes of the Drifters, Frankie Lymon and the Impressions. That much is evident in their early 1960s sides for Studio One and their seminal – some would argue their finest – recordings in the early 1970s, some self-produced and some helmed by the wildly inventive Lee “Scratch” Perry.

The Island albums that start with Catch a Fire in 1973 are Marley’s most commonly-cited oeuvre. This is where reggae’s stirring beat, its strong pulse and its cries for social justice and global unity, often inspired by the Rastafari faith, begin to blast from stereo systems in the bedrooms of American youngsters. (Inexplicably, white kids jumped in with both feet, while Marley had difficulty getting black youth to follow suit – a situation that persisted into the last years of his career.)

Marley’s ability to bring reggae’s message and sound to a large audience struck a particularly important chord with disenfranchised punks in the U.K., who drew inspiration from the newly-discovered beat and its social commentary to revitalize rock ’n’ roll in the late 1970s, just when it was in need of a transfusion.

If the rest of us now also take that distinctive beat as a given in our musical vocabulary, it’s a gift from Bob Marley.

For the original report go to http://www.montrealgazette.com/entertainment/wrote+Book+Rock+Marley/6687735/story.html