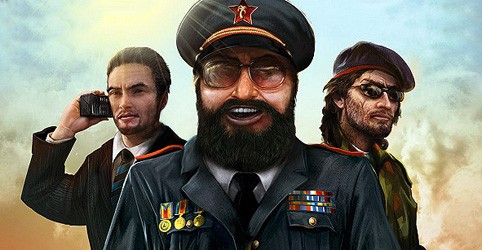 Even veteran gamers need to stretch themselves sometimes. VG24/7.com sent Brenna on the adventure of a lifetime to master both a new genre and a tiny tropical nation. Tropico 4: Viva el Presidente is a series of management simulators for Mac, PC and Xbox 360 dating back to 2001. Lately developed by Haemimont Games for Kalypso; the first was the product of PopTop Software, now absorbed into Firaxis. Tropico 4 is set on a series of fictional Caribbean islands during the Cold War era.

According to this fortune cookie, it’s good to break out of your comfort zone, challenge yourself and try new things. Every now and then I get a mad desire to learn how to properly play an unfamiliar genre and spend four or five hours humbling myself before swearing off the whole thing for ever and ever (again).

Recently I took this go-getter attitude to Tropico, expecting a smilar pattern. I like the idea of Tropico because you play El Presidente, a trope I have loved ever since The Young Ones. Also, you get to arrange building in pleasing patterns, and since I still live in a rental, I need to scratch my home decor itch somehow.

Tropico (3 or 4, I’ve been playing both) famously allows for rapid zooming between the micro and the macro, in both graphics (interestingly, my recent, dual GPU SLI build wheezes slightly when I turn even Tropico 3′s graphics up to ultra and scroll in and out – the level of detail is astounding and both games are quite future proof) and gameplay. It’s a compelling blend of The Sims-like management (checking the individual needs and thoughts of citizens), city building (laying out roads and regions for maximum efficiency), broad political strategy (juggling internal factions and international relations) and even real-time strategy (producing and managing resource chains and structures).

It’s a heck of a lot to take in, especially if you’re a total newb like me, and while the tutorials in both games make a decent attempt at introducing the basics, they basically fail – being shown how to access dozens of graphs or check one of 100 citizens’ political affiliation doesn’t teach you when you should actually do it, why, and what to do with the information afterwards.

My first few hours as an island paradise dictator were not that impressive. I had goals and I worked towards them, but I kept running out of money and being swamped by rebels. I couldn’t work out how to resolve the problems my advisor flagged or even if I had to, and everyone kept protesting and voting me out. I had information overload. I was frustrated. I was bored.

Then I figured out for myself one teeny, tiny detail – how to navigate one of the many, many sub menus – and suddenly it was like my mind opened. Phenomenologically, it was the exact opposite of a gbeneral anaesthetic; numbers rushed forward and resolved themselves as meaningful signifiers; my vision expanded so far I was looking into each ear; the sound and fury resolved into tracable patterns of thought.

Aha, I told my cat. Aha look. This citizen wants to go to the pub. He doesn’t give a shit about the GDP, which is the goal of the level. He just wants to get pissed.

And so, living out a lifelong dream, I built a pub. And then a clinic. And then some new houses. And then some places to work, because somebody else had no money to spend at the pub. Sometime later – I honestly could not say how long – a message popped up on screen informing me I had won the first level of the campaign.

Tropico has its flaws; it’s not as difficult as hardcore simmers would like, and while it touts itself as a bit of a sandbox in the end you’re almost always going to get better results and make more money if you take the benevolent man of the people route rather than any particular extreme. But it does something quite different to the triple A releases I normally devote my time to, and in working to master it, I feel a sense of satisfaction missing from those games where I already know how to play before the title screen pops up.