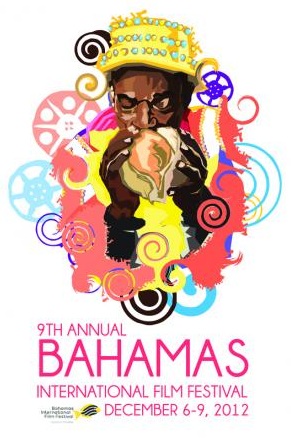 Theo McClain has been flying under the radar in the world of Bahamian art, but with his poster design for the 2012 Bahamas International Film Festival, he’s set to become a household name – locally and abroad – for artists and film buffs alike, Sonia Farmer reports in this article for Nassau’s Guardian. His design was one of many submitted to BIFF’s poster design contest announced earlier this year.

After careful consideration by judges Dionne Benjamin-Smith, Lise Anderson and Logan and Lavar Munroe, McClain’s “Junkanoo Blower” came out on top for capturing the thrilling spirit of the BIFF for visitors and locals alike. “When it was announced I screamed here at work,” says McClain. “I was very excited, I got chills. It’s the first local competition I have won.”

“I think the image I did basically set a new standard for imagery for poster design in The Bahamas alone separate from the Film Festival,” he continues. “It’s fresh on the eyes and full of color and embodies Bahamian culture. It isn’t as complex as it looks, it’s simple like how we live.” The piece, says the artist, is taken from a photograph he took during Junkanoo. Besides being an accomplished illustrator, McClain is also skilled in photography, being the recipient of the Silver Quill award from The International Association of Business communications in 2010 and 2011 for his photography and design work on the 2010 and 2011 Colina Insurance Annual Report and 2011 Calendar, “The Art of Charity”, which raised more than $8,000 for local charities.

“When I shoot, I try to freeze the image to where I still get that emotion from when I was there physically,” he said. “So it kind of is like film, but a still image that evokes movement and is still vibrant. It’s like when you hold a conch shell to your ear and you can hear the sea.” Indeed those examining his image can almost hear the call of the conch shell, the call of Bahamian culture and soul. The image melds the vibrancy of Junkanoo parades with the thrill of cinema, expanding the Bahamian cultural landscape.

As Leslie Vanderpool, founder and executive director of BIFF, points out, opening the poster design competition to Bahamian artists only this year is a testament to the festival’s continued support of local artists. “I am thrilled to announce the winner of the 2012 Bahamas International Film Festival (BIFF) Poster Competition,” said Vanderpool. “The decision was a difficult one as the talent was so great! The collaborative process is something BIFF is proud to provide, whether it is by showcasing films or providing a platform for other visual artists.”

McClain’s design will be seen far beyond our shores, becoming this year’s “face” of the annual festival and giving him – and Bahamian visual art and design – some welcome exposure.

“The exciting part about it is the fact that I’m getting my name out there,” he said. “A lot of people don’t really know who I am because I’ve never had a show. After winning the competition I’ve gained a lot of recognition and business, so before the film festival I’d like to follow up on it with a show.”

“My mother, from since I was in high school and seeing I was gifted in arts, said she wanted me to be famous,” he added. “I told her it would happen in its own time. I’ve never sought out fame, but it’s just through the steps I’ve taken that I’m driving towards it. But I just want people to really like my work for what it is.”

Pushed by his mother and mentored by local artist Kim Smith, McClain pursued visual art, majoring in illustration at Savannah College of Art and Design in Savannah, Georgia. Now a senior designer at his own local marketing agency Sidda Communications, has completed work for Islands of the World Fashion Showcase, the Cancer Society of The Bahamas, and Bahamas Junior Achievement. Now, McClain sets his sights on a gallery show.

“I’m not one to put myself out there, I’m still breaking out of my shell,” he admitted. “When Leslie posted my design on Facebook and I saw those positive comments, it gave me a boost of confidence to show my work to the public and inspired me.”

The Bahamas International Film Festival is a nonprofit organization dedicated to providing the local community and international visitors with a diverse presentation of films from around the world. In addition to offering films that might not otherwise be released theatrically in The Bahamas, BIFF will provide a unique cultural experience, educational programs, and forums for exploring the future of cinema.

For the original report go to http://www.thenassauguardian.com/index.php?option=com_content&view=article&id=31248&Itemid=59[5/26/2012