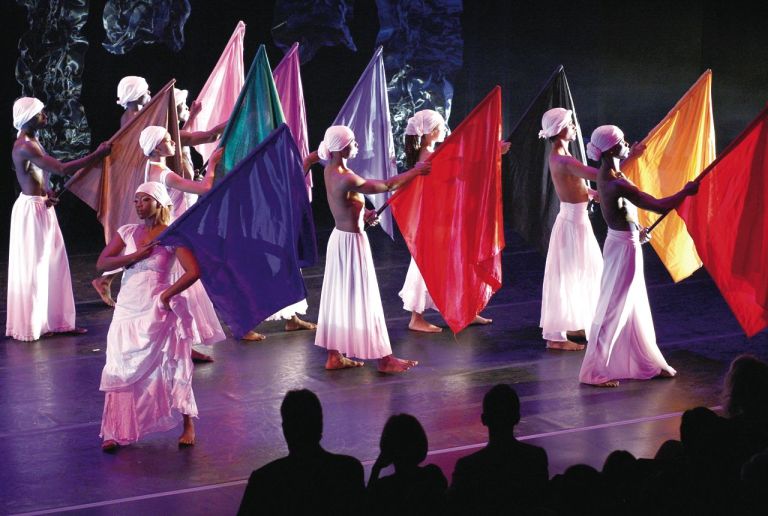 Physically ripped and emotionally expansive, the Haitian dance troupe Ayikodans returned to Miami and the Adrienne Arsht Center on Friday evening. The swell of emotion that surrounded the troupe’s performance there a year ago, as community leaders gathered to support a company on the verge of collapse after the Haitian earthquake, has leveled off somewhat. And that made it easier to look at the troupe and its work—as Jordan Levine writes in this review for The Miami Herald.

Choreographer/director Jeanguy Saintus’ nine dancers perform with a physical and emotional intensity that makes them seem always about to explode. Lean, narrow-framed and muscular to a degree exceptional even for the dance world, they’re built like greyhounds — but with the ferocity of tigers. Add powerful live drumming, and Ayikodans has a terrifically intense — and at times overwhelming — impact.

Saintus created Anmwey Ayiti Manman! (Cry Haiti Mother) right after the 2010 earthquake, as he and the three dancers he was able to gather grappled with the terrible event. The mesmerizing Linda Isabelle Francois is a Haiti mother figure, but she’s no maternal tower of strength — she’s as tortured and uncertain as her trembling offspring, Johnnoirry St. Phillippe and Makenson Israel Blanchard. Barbed wire drapes the bare concrete wall at the back of the Carnival Studio Theater, and tops two walls covered with newspapers on each side (Haiti hemmed in by bad news), and the sounds of wind, ominous rumbles and singer James Germain’s plaintive vocals add to the bleakness.

The men scramble on the floor and clutch Francois’ legs, cover their gaping mouths in a silent howl, hurl themselves at the walls and try to climb over. Francois stretches arms and legs in spasmodic pleading, then curls into a ball, unable to help herself or them. At the end she puts her neck into a noose hanging from the ceiling, then jerks it down, and hurls it to the ground in defiant, frustrated rage as the lights go out — a moment so unnerving and strange the audience didn’t know how to react. Ayiti Manman is so raw that it can seem like therapeutic more than artistic expression, an unmediated outpouring of emotion.

Danse de l’araignee (Dance of the Spider), a new work commissioned by Arsht Center, was passionate in a more physical and exhilarating way. Inspired by Gede Zarenyen, a Haitian vodou spirit, and by spiders themselves. Saintus doesn’t shy from creepy-crawly imagery or movement — Danse de L’Araignee seethes with aggressive, coiling, unthinking energy, and even touches of cartoony horror. The nine dancers wear ghostly grey-black lip and eye makeup, and early on carry metal bowls on their heads, where reflected red lights look like buggy eyes. (Al Crawford, lighting designer for the Alvin Ailey American Dance Theater, donated his talent for dramatic lighting.)

But what mostly emerges from Araignee is a surging collective power, driven by five drummers pounding out incendiary, rapid and complex rhythms, and Germain’s soaring, moaning, raw gospel voice. The dancers, in Malou Cadet and Miko Guillaume’s tight briefs or slinky black dresses, writhe and crawl and roll over each other, reaching hands clutched like claws, taut legs snaking up by their ears, eager to attack or merge. The women — Francois, Cassandra Woolley Dolce, and Sephora Germain — stalk and snake their torsos. Steven Vilsaint and Emmanuel Pierre hang from a suspended ladder, seeming to turn themselves inside out. The dancers explode in leaps and (in the case of the astonishing Vilsaint) flips in the air, then rocket to the floor. The dancers’ intensity and force are spectacular, and Saintus brings them and Araignee to a wild level of animal intensity and energy. It’s thrilling — breathtaking even — but also exhausting, like a ritual that lifts you up even as it wrings you out.

For the original report go to http://www.miamiherald.com/2012/05/26/2818858/haitian-dance-troupe-ayikodans.html#storylink=cpy