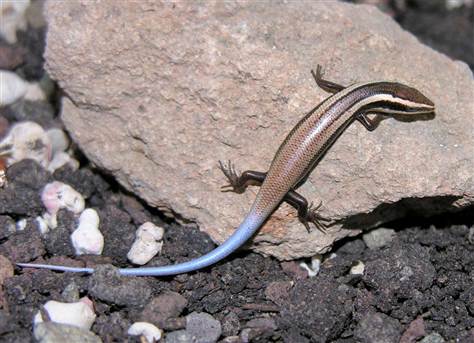 Researchers have discovered about 24 new species of Caribbean lizards of the type called skinks. Unfortunately, half of these, which were identified from museum specimens, may be extinct or close to extinction, with the others threatened with extinction, according to lead study researcher Blair Hedges, a professor of biology at Penn State University.

The researchers examined the specimens using DNA and the appearances of the animals, including the number and shape of their scales, to identify them. Of the 39 species they identified from the Caribbean, six were already known and nine had been named long ago but not considered valid until now.

New World skinks, like those identified, arrived in the Americas about 18 million years ago from Africa, possibly by floating on mats of vegetation. Their claim to fame comes from their ability to produce a humanlike placenta, the organ that connects growing offspring to essential nutrients from the mama. “While there are other lizards that give live birth, only a fraction of the lizards known as skinks make a placenta and gestate offspring for up to one year,” Hedges said in a statement.

As pregnancy can slow an animal down, this lengthy gestational period may have given skinks’ predators a competitive edge; they think the small Indian mongoose (Urva auropunctata) — an invasive species introduced by farmers in the 19th century to control rats in sugarcane fields — is responsible for the loss of many skink species. “Our data show that the mongoose, which was introduced from India in 1872 and spread around the islands over the next three decades, has nearly exterminated this entire reptile fauna, which had gone largely unnoticed by scientists and conservationists until now,” Hedges said. [. . .]

The research, funded by the National Science Foundation, is detailed in Monday’s issue of the journal Zootaxa.