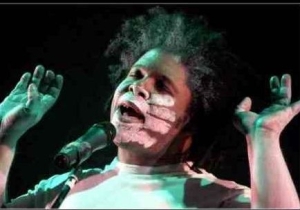 Andra Simons has been selected to represent Bermuda at the Poetry Parnassus (Poetry Olympics) this summer. The Olympics, organized by London’s Southbank Centre, runs from June 26 through July 1, 2012.

It is expected the Poetry Parnassus will be the biggest gathering of poets in the world — a panel is now searching to find one poet from each of the 204 competing Olympic nations. [. . .] According to Mr. Simons, who has no clue who nominated him, being selected to collaborate with artists of such calibre is “an honour”. He said he was contacted by an event organiser on Facebook. [. . .] “I said I would love to be a part of it.”

He was eventually sent a formal letter, which stated that 4,000 names had been submitted worldwide, before researchers narrowed down the top picks. They then went through his work and determined his poetry was “strong enough” to be included in a collective anthology.

“When I first found out I was very excited and felt very privileged, but it wasn’t until I read through an article in The Guardian and online, and I went to look and read about everyone that was going to be involved that I felt incredibly humbled,” he said.

Mr. Simons said he was “extremely proud” to represent Bermuda, despite emigrating to England in 2004. “Anyone that knows me here knows I am extremely connected and all my work centres around being an Island person [. . .].”

In addition to his own poetry, Mr. Simons was a guest lecturer at the University of Greenwich for two years. He started writing around the age of 11, encouraged by his mother Coralita to explore his creative side. He said he has always been inspired by Greek myths and mythology. [. . .] Mr. Simons was a co-founder of the Flow Sundays Open Mic event when on the Island and was also one of the front runners during the early years of spoken word in Bermuda. He is currently working on his latest poetry collection, which is partially supported by Bermuda Arts Council.