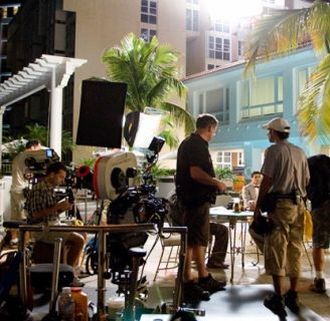 Caribbean Business reports on the aggressive incentives offered by the Puerto Rico Film Commission to attract filmmakers to the island.

Rosi Acosta, of the local production firm KCPR, said that the film “Hands of Stone” will be made in Puerto Rico because of the “versatility of locations that allow any Latin American country to be recreated.” The project will be boosted by the incentives from the Puerto Rico Film Commission and provide the island with an estimated $16 million economic infusion, according to Acosta.

Puerto Rico’s aggressive incentives, solid infrastructure and sound legal protections are continuing to pay off in the effort to grab film industry attention. [. . .] Puerto Rico’s new Film Industry Economic Incentives Law improves on the current available incentives to increase the number of film projects produced in Puerto Rico. It is aimed, at least in part, to keep the island ahead of competitors such as the Dominican Republic, which has upgraded its own set of economic lures.

[. . .] Since 1999, more than 60 productions have taken advantage of incentive programs in Puerto Rico for film and creative services, including recent big-budget films such as “Pirates of the Caribbean 4,” “Fast Five” and “The Rum Diary.”

Pérez has said the island’s incentives package isn’t the only draw, noting that producers like that Puerto Rico is a U.S. territory, where the currency is the American dollar, and U.S. citizens don’t need a worker’s visa or a passport.

Leading industry publication Variety has trumpeted Puerto Rico’s varied settings, noting that the island has stood in for Iraq, Vietnam, Spain, Brazil, Cuba and various other “far-flung places” as filmmakers increasingly look to the island for its diverse backdrops and talented local crews.

[Many thanks to Caroline Ferrandino for bringing this item to our attention.]

One thought on “More Filmmakers Set to Film in Puerto Rico”