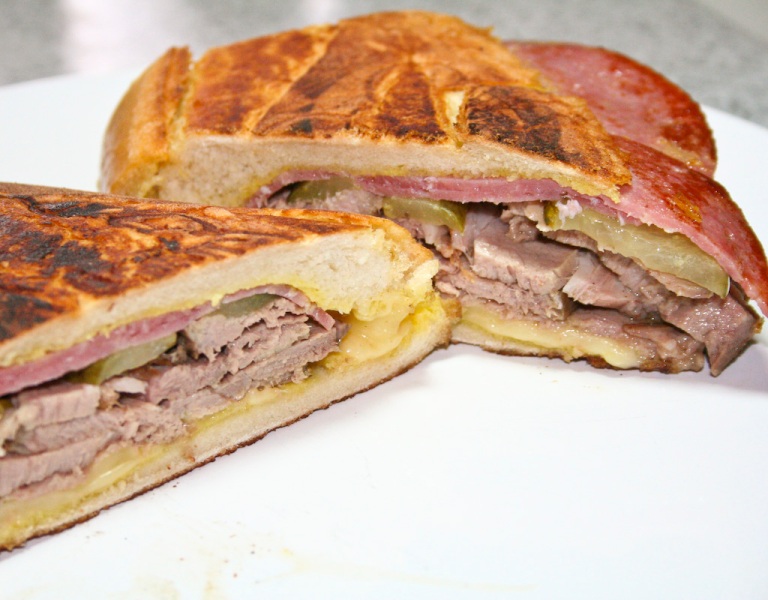 Ah, the Cuban sandwich … the succulent pig meats fused with melted Swiss, sharp pickles, yellow mustard and crunchy bread on a hot press. So delectable, so beloved, so redolent of its home in … Tampa?

Yes, it’s true: That burg at the other end of the Tamiami Trail from Miami is laying claim to the sandwich that Cuban exiles made famous, or so Andres Viglucci claims in this article from The Miami Herald.

On Thursday, Tampa’s city council will vote to adopt what it calls the “Historic Tampa Cuban sandwich” as the town’s “signature sandwich.” The resolution, the product of efforts to promote the culture and history of Tampa, is based on research that concludes that what is known today as the

Cuban sandwich originated in the Cigar City, so known because of the Cuban cigar makers whose arrival there in the 19th Century predates the very existence of Miami.

The Tampa resolution lays out in detail, down to the number of dill pickles (three), the recipe for such an authentic Cuban sandwich, which of course includes real Cuban bread, roasted marinated pork, ham …. and Genoa salami.

For as long as anyone in Tampa can remember, the town’s Cuban sandwich makers have slipped a slice of salami or mortadella in between the pork and the cheese, reflecting the influence, researchers say, of the Italian immigrants who joined the Cubans in Tampa’s Ybor City at the turn of the last century.

Which draws a chuckle from Miami Mayor (and Cuban exile) Tomas Regalado who, like many in Miami, had never heard of a Cuban sandwich with salami.

“Oh. Wow,” Regalado said. “Tampa certainly has a tradition, but salami is for pizza.”

A matter of pride

What is certain is that the Tampa resolution has landed, among those Miamians who take such matters very seriously, like a shot across the bow of exile pride, rekindling an old debate about the cloudy origins of the sandwiche cubano and — por supuesto — who makes the best one.

Or whether it’s even possible to get a good cubano anymore, in either city, as sandwich makers increasingly resort to cheap ingredients like boiled ham instead of glazed, and processed pork in place of slow-roasted, mojo-steeped pierna, or bastardizations for the American palate like lettuce, tomato and mayo, as in the version sold in some places in Key West and Tampa.

Virtually everyone agrees that it’s hard to find one in Cuba, where pork and good ham are too expensive or hard to come by, outside a few tourist spots in Havana. And while exiles in Miami say the sandwich, or some version of it, was a pre-Revolution staple of cafeterias and bodegas in Havana, it’s unclear whether it was ever common outside the capital.

“I have been to Cuba, I have been to Miami, and neither of those places serve a good Cuban sandwich,” Tampa artist David Audet, whose research into the history of the cubano was used in drafting the city’s official-sandwich resolution, was quoted as saying in The Tampa Bay Times.

Now those are fighting words. Only half in jest, Mayor Regalado challenged Tampa to a sandwich smack down. As it happens, the Latino Times publication is organizing a Cuban sandwich festival in Tampa on May 26 at which sponsors will revive the city’s dormant tradition of Cuban-sandwich competitions.

Organizer and Tampa native Victor Padilla said he welcomes contestants from Miami. He acknowledges both the Miami and Tampa varieties as valid, so long as basic ingredients are respected. His own favorite is the way his Cuban abuelita used to make it — with the salami and both mustard and mayo, and buttered and pressed.

“Everyone has the different taste that they like, but all in all it’s the quality of the ingredients that matters,” he said.

Variations on a theme

Yet even in Padilla’s formulation there is much aficionados debate beyond the salami: The mayo, for sure, the mustard — some favor it, some, like Regalado, don’t — even the pressing, which some say is not historically authentic. On that last point, the Tampa council’s recipe abstains.

“Whether they press it or toast it, that’s micromanaging,” said Tampa council member Yvonne Yolie Capin.

But that Tampa’s cubano long precedes Miami’s, Capin has no doubt. She cites research conducted by a city task force, which concluded that Cuban cigar makers adapted the old mixto sandwich — mixed meats slapped between loaves of bread for lunch break — from their native island, using what they found at hand in Tampa.

“This is an oral history, and like all oral histories you say, ‘It is likely this happened this way,’ ” said Capin, whose great-grandfather was Cuban. “We’re not saying it’s the best-tasting. We’re saying we’ve been serving it for over 100 years. And it is very much a Tampa creation.”

In other words, the Cuban sandwich may have originated in Cuba but was perfected in Tampa, contends University of South Florida research librarian Andrew Huse, author of a history of the city’s most celebrated Spanish-Cuban restaurant, the Columbia, which opened in 1905. Huse, a self-confessed Cuban food fanatic, said he’s found mention of a Cuban sandwich on Tampa menus dating back to the early 20th century, including versions with turkey and tomato, but it settled into its accepted shape by World War II.

Nice theory, some in Miami say. But it doesn’t explain why the sandwich — sans salami — was served in popular Havana cafeterias like El Siglo XX and El OK and numerous corner bodegas, though of course it wasn’t called a Cuban sandwich in Cuba.

“You would call out, give me a sandwich, and the lonchero would know what you meant,” said Max Lesnick, an anti-Batista student leader in Havana in the 1950s who can still recall where the best ones were served, who the sandwich makers were and the basic recipe: Cuban pan de agua (made without lard), home-roasted pork, Virginia ham, Swiss, pickles and mustard, not pressed. The price was 40 cents.

At one bodega, a sandwich maker known as Paco drew a following of student agitators, including himself and Fidel Castro, said Lesnick, who for a time around 1956 ran a chain of six Havana stands serving another staple sandwich, the frita. It was Paco who, while still in Havana, provided the sandwich recipe to an early exile Lesnick recalls only as Badia, who began serving them at a lunch counter on Flagler Street around 1961 or 1962 in what later became known as Little Havana, he said.

But another Cuban-American in Miami says his late father served the first Cuban sandwich in Miami in 1947 — and he’s got some proof. Frank Garces says his dad, also Frank Garces, bought a bar named the Do Drop Inn in Miami after arriving from New York and began serving Cuban sandwiches along with hot dogs. A year later, he took over the Knife and Fork, a lunch counter in Allapattah.

The sandwich proved so popular with Cuban garment workers from the area that Garces Sr. put a sign atop the diner proclaiming it “The Home of the Cuban Sandwich.” Garces has date-stamped photos of the Knife and Fork from 1950 and 1954 showing the signs advertising the Cuban sandwich.

Garces says he believes his father learned to make the sandwich while working at various jobs in Havana in the 1920s. It had mustard and no salami, the same version he enjoyed during summer trips to the city, Garces said.

But there’s one thing some Cuban sandwich lovers in both Miami and Tampa can agree on: They don’t make ’em like they used to.

“If you find a good, even edible, traditional Cuban sandwich in Miami, please tell me,” Enrique Fernandez, a Cuban-born Miami writer raised in Tampa who contributes a food column to The Miami Herald, said in an email. “For that matter, I don’t know where the good ones are in Tampa these days.”

Where the best ones may perhaps still be found, he said, is in San Juan, Puerto Rico, where Spanish-Cuban bakers and cooks and their children opened bakeries and cafeteria-style delis after the 1959 Revolution, serving sandwiches with quality meats and cheese.

An informal Herald staff sampling of $5 to $6 Cuban sandwiches from popular Miami spots with good reps found all of them wanting in at least one respect, be it tasteless ham, stringy or insufficient pork, or gloppy cheese.

There was one exception: The $7.50 Cuban sandwich at Jimmy’Z Kitchen, a Wynwood restaurant known for ungussied-up renditions of classic Caribbean dishes made with top ingredients.

Owner Jimmy Carey, whose mother is Cuban, grew up in San Juan eating cubanos at those Spanish-Cuban bakeries. When he came to Miami to work as a chef in high-end kitchens, he couldn’t find the flavorful Cuban sandwiches he recalled. So when he opened his own place on South Beach six years ago, he began making his own in the traditional, painstaking way: slowly roasting his own pork, slathered in mojo, a garlic and citrus marinade, and adding a high-grade pit ham and ballpark mustard.

The only place he departs from the traditional is the bread. Carey uses an Italian paneba bread whose crunchy crust and soft inside he says presses well and stands in admirably for Cuban bread.

But, in the end, whether Tampa or Miami came up with the sandwich recognized the world over, librarian Huse said, “is all conjecture.”

“It could be Miami came across the sandwich itself independently of Tampa,” he said. “At some point, we have to acknowledge that both cities share a heritage.”