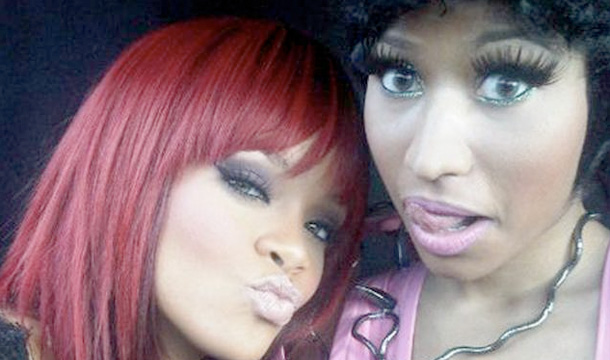 Many things can be (and have been) said when speaking about Rihanna and Nicki Minaj—Lea Brown reports in singersroom.com.

Everything from their chart-topping hits, to their fashion risks, they are some of the most talked about artists today. Yet another thing that unifies them is there highly sexual image. Go to any Rihanna concert and you may be present during a display of foreplay and masturbation on stage. Attend a Nicki Minaj concert and be entertained as Minaj walks around, dildo in hand and in place. Not to mention the impromptu (or not) lap dance for a surprised fan.
The vamped images of the singers have spurred some talk about the responsibility of entertainers to be role models. In an interview with British Vogue in October 2011, Rihanna explains “See, people…they want me to be a role model just because of the life I lead. The things I say in my songs, they expect it of me, and [being a role model] became more of my job than I wanted it to be. But no, I just want to make music. That’s it.”
Minaj, on the other hand, sees herself as a role model. The ‘Moment for Life’ singer told MTV News, “If there’s one thing I want people to take away from it, it’s just that little girls can aspire to be anything, and that’s all I want people to see.” The most recent display of pre-pubescent admiration for Minaj is Sophia and Rosie, the two little girls from England who famously and energetically sang ‘Super Bass’ on the Ellen Show; proof of the fact that the influence of Rihanna and Minaj trickles down to young children.
Yet another factor that unifies the two popular artists is the fact they both hail from the Caribbean. With Rihanna from Barbados and Minaj born in Trinidad, other island-born artists, such as Jamaican-born dance hall king Sean Paul, weigh in on his fellow West Indian hit-makers.
In an interview with taletela.com, the “She Doesn’t Mind” singer says, “Just the fact that they’re from there…they’re speaking on so many different crazy topics sometimes that maybe Caribbean people don’t always gravitate towards, and they’re music is really provocative and out there,” he says when explaining the reason for the backlash of the ladies’ images. He goes on the say, “But that’s something that I don’t mind. As a musician I really like what they’re doing. Being that they don’t speak on Barbados and Trinidad everyday, they’re from there. And they’re being an ambassador whenever they like.”
He then adds, “What Rihanna [and Nicki] talk about may not be what people love in their country, [then] I say allow them then. They don’t wave the flag for you.”

For the original report go to http://singersroom.com/content/2012-04-11/Sean-Paul-Defends-Caribbean-Counterparts-Nicki-Minaj-and-Rihannas-Image/#ixzz1rr3q3jEk