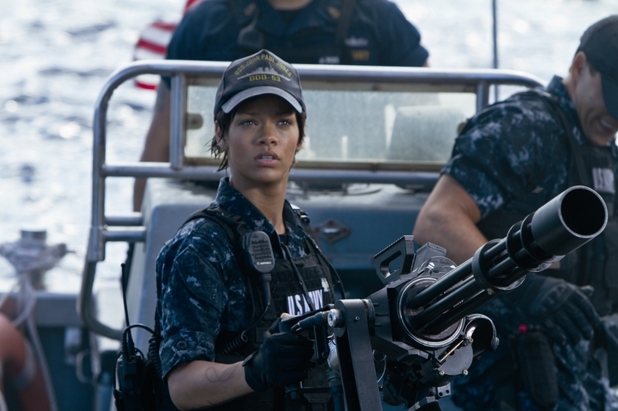 She may be the Caribbean Queen of Pop but can Rihanna cut it on the big screen as a movie star? H. Martin thinks she may have what it takes. Follow link below to the original post.

She makes her feature film debut this week in the extra-terrestrial blockbuster Battleship. But will it be plain sailing or a shipwreck for the superstar singer?

The history of Hollywood is paved with movie hits and misses for pop singers. Those who have topped the charts on screen and with song include Frank Sinatra, Cher and Justin Timberlake. And those who have been top of the film flops include Mick Jagger, Sting and of course Madonna.

“Are you ready to play with the big boys?” a navy veteran asks Rihanna in Battleship. “Yes sir, awesome” replies Rihanna. Awesome is right, as Rihanna locks and loads to exterminate evil ET’s at sea as Petty Officer Raikes. The world is under threat as Mars Attacks. Well, not Mars this time but the Planet G, a hostile alternative earth from a far off solar system.

This is a GI Jane debut role, with Rihanna capped and booted as the no nonsense naval cadet. Gone is the trademark red hair, sexy dance moves and pop pouting performances. She may be the only girl on this Battleship but what shines through is Rihanna’s inexplicable star quality and that bewitching Bajan accent.

Rihanna, full name Robyn Rihanna Fenty is a twenty four year old pop sensation from Barbados. Since she found fame as a talented teenager with her worldwide hit ‘Umbrella’ in 2007, Rihanna has taken the music industry by storm. In the UK alone she has had more than 10 million sales and is the first female artist in the history of the UK chart to have a number one in five consecutive years.

You might then have expected Rihanna to make the move to movies in a musical or a romantic comedy. But she has chose instead a $200 million mega sea battle based on the classic board game. 1970’s toy fans will delight in a retro sequence in the middle of all the monster special effects when the familiar computer battleship grid appears on screen complete with strike coordinates.

All the actors including Liam Neeson as Admiral Shane take a back seat to the bombastic unrelenting action. Transformers meets Pearl Harbour with a twist, as the USA and Japanese navies rage not against each other but the alien machines.

This is one of the loudest films I have ever sat through in the cinema. My eardrums were pounding from crashing metal and thrashing rockets, all scored with a pounding heavy rock soundtrack. Unfortunately, the closest we come to Rihanna singing is a few bars of the old 1940’s favourite Sentimental Journey on her way to investigate the alien ship.

Rihanna is a natural on screen. She’s the kind of performer whether blowing up aliens on the big screen or cavorting in a pop video in a County Down field, that you can’t take your eyes off.

11 thoughts on “Rhianna vs Aliens: A review of her acting in ‘Battleship’”