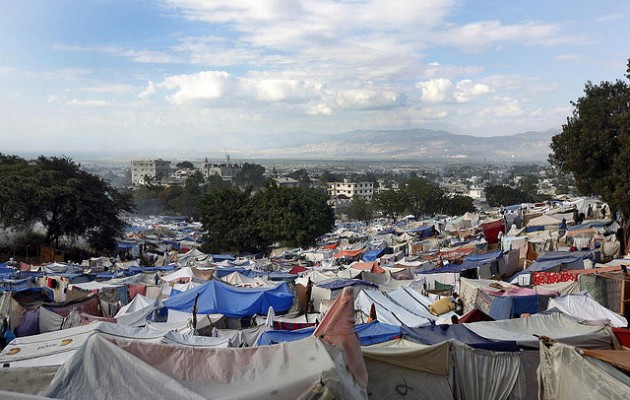 An article by Isabeau Doucet from the Bureau of Investigative Journalism (see link below).

After the Caribbean fault lines ripped apart Port-au-Prince, one of the poorest and most densely populated capital cities in the world, over two years ago, Haiti became the recipient of the most generous outpouring of solidarity in the form of disaster relief donations in the history of the United States. One out of every two American households gave a stunning $1.4 billion to a total of 23 major charities, and the international community came together pledging an unprecedented $5 billion – the largest pot of post-disaster reconstruction money ever.

‘People [in Haiti] are very poor, but they’re not stupid. They’re very, very aware that the money was raised with their suffering and their poverty and it’s not being spent on them.’
Linda Polman, journalist and author.

Here’s the catch: The vast majority of the jackpot was not donated directly to the Haitian people or their elected government, but rather to a proliferation of international NGOs with sophisticated PR apparatuses whose urgent emotional appeals, user friendly donation methods and humanitarian brands made them seem like the natural broker of the emergency aid funds.

The film Haiti: Where did the Money Go? has been aired on dozens of PBS channels across the US, on Capitol hill, in tent camps of Haiti and will today be screened at University of London Union (ULU), tomorrow in Oxford and should be available online in the coming weeks. Though it’s not the most in-depth piece of reporting on post-earthquake accountability in Haiti, and glosses over the country’s complicated history with NGOs, the film’s naiveté does an excellent job of communicating the shocking disparity between the outpouring of money and what’s actually spent on emergency relief for victims of the quake. More importantly, the wide-reach of PBS broadcast has sparked a much-needed debate on the transparency and effectiveness NGOs, which Haiti advocates and the congressional black caucus hope will lead to a congressional inquiry into the work of big NGOs.

A storm of criticism

The American Red Cross and Catholic Relief Service, among those interviewed at length in the film, hit back at PBS criticising the film for “inaccuracies”, “false statements” and “distortions” but their statements have only backfired to reveal how little they actually knew about conditions on the ground.

“We could have been so much harder on the American Red Cross” filmmaker Michele Mitchell told The Bureau of Investigative Journalism, but rather than admitting any regret, says Mitchell “they went nuclear on us.”  They would have been wiser to let the storm of criticism blow over, as their embarrassingly defensive reaction to the film has only confirmed the criticism that they’re more concerned about protecting their brand’s reputation than doing right by the intended beneficiaries of their aid.

During two visits to Haiti ten and twenty months after the earthquake, Mitchell interviews internally displaced camp residents, NGO spokespeople, aid workers, academics and human rights advocates, trying to track down the aid money in the tent camps where as many as 1.5 million displaced Haitians languished at the time.

Viewers accompany her through a visceral journey into a city that looks like it’s been shelled like “Beirut in the 70′s”, a city where the gagging stench of 6 latrines reveals them to be shared by 5,000 camp residents, where people often paid for their tarpaulins and were provided with water that made them sick.

Her first visit coincides with a period when Haiti was facing three full-blown humanitarian emergencies: post-earthquake internal displacement, the outbreak of cholera and hurricane Tomas. Though such simultaneous crises were unprecedented challenges for the UN and NGOs, they had 10 months to prepare for hurricane season and the high possibility of a cholera epidemic, and yet no plans were in place other than instructing camp residents to drop their tents and evacuate to higher ground as the hurricane passed.

There does exists a humanitarian code of conduct for the minimum needs of displaced populations, known as the SPHERE standards, however “there’s no legal requirement” to adhere, says Peter Walker of Tufts University who helped initiate the standard. Nor is there “an industry association that you’re a member of which requires you to deliver to those standard.” The SPHERE was never adhered to in Haiti and accountability often came down to the threat of bad press from journalists.

Haiti was famous for being the republic of NGOs and a graveyard of failed NGO projects even before the earthquake. In the aftermath, at the donor conference in New York where the international community came together to raise money to rebuild, “they swore on the graves of their mothers that this time it would be different” says Linda Polman, Dutch journalist and author whose caustic pen has produced several damning critiques of the NGO “aid caravan”, UN peacekeepers and the relief and reconstruction complex. “People are very poor, but they’re not stupid. They’re very, very aware that the money was raised with their suffering and their poverty and it’s not being spent on them.”

Most aid workers genuinely want to do good, but they also want to have a good time and don’t want to forsake their first world living standards, unfortunately that can look offensive, wasteful, parasitic to the victims on the ground whose tragedy pays their salary.

When asked where the money has gone one resident of an IDP camp says it has gone to “paying for beautiful hotels to sleep in.” The UN themselves say rents have gone up 300%. Mark Schuller, American Anthropologist at CUNY, who has conducted the most definitive field studies of aid in Haiti’s tent camps says “You can call it non-profiteering if you like, you can call it disaster capitalism if you like, but that’s what’s happening right now in Haiti.”

Across the street from a squalid camp where three latrines service an estimated 7, 000 people, fleets of white SUVs line the streets as aid workers and Haiti’s tiny elites frequent a luxury restaurant with an extensive wine menu, tuna tartar, escargot and New York steak at $34. Most aid workers genuinely want to do good, but they also want to have a good time and don’t want to forsake their first world living standards, unfortunately that can look offensive, wasteful, parasitic to the victims on the ground whose tragedy pays their salary.

The films biggest flaws are its over-reliance on American voices to tell of Haiti’s plight, only featuring Haitian voices as victims, while ignoring any Haitian government officials and their critiques of the relief effort.  Limited by the time spent shooting on the ground, the film’s critique of NGOs perhaps doesn’t go far enough, but its mainstream reach is bringing under scrutiny the very important topic of disaster and aid accountability.

For the original report go to http://www.thebureauinvestigates.com/2012/03/19/haiti-where-did-the-money-go/

3 thoughts on “Haiti: Where did the money go?”