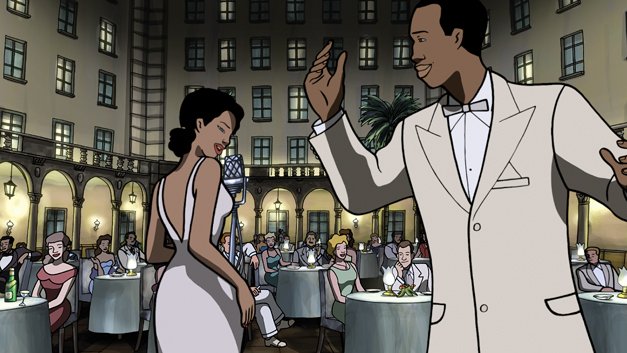 THE CUBAN ANIMATED feature “Chico and Rita,” which has been nominated for an Academy Award, will be screened during “La Quinceañera” at the 15th annual Sonoma International Film Festival, as Emily Charrier-Botts reports for The Tribune.

The Sonoma International Film Festival will mark its 15th birthday in April with a new offering aimed at celebrating Spanish-language films. “La Quinceañera Film Fiesta,” a two-day festival within the festival, will bring a wide variety of cinema, from features to documentaries, representing some of the 16 Spanish-speaking countries that produce films.

“Films will be from all over, with an emphasis on films from Mexico,” said Claudia Mendoza-Carruth, who is organizing “La Quinceañera” for the film festival.

The Sonoma International Film Festival takes place Wednesday through Sunday, April 11 to 15. “La Quinceañera” is set from 11 a.m. to 11 p.m. on Saturday and Sunday, April 14 and 15, with a kick off party complete with mariachi music set for Friday, April 13, in the Back Lot tent on the Plaza.

“All of these ideas came from the film festival turning 15,” said Mendoza-Carruth, explaining that in the Latin culture, a quinceañera is the celebration of a girl’s 15th birthday, when she becomes a woman. “The film festival is coming of age,” she added.

And with that milestone, the festival is making an effort to be more inclusive, more accessible and more representative of the entire Sonoma Valley population, specifically Spanish speakers.

Scott Ware, chair of the film festival board, said, “As we celebrate our quinceañera anniversary, this is an important way we can show our appreciation for the Latino community and its rich contributions to cultural life in Sonoma Valley. We’re excited to have Claudia Mendoza-Caruth putting together an incredible program of films that will add a valuable new dimension to the festival.”

After seeing just one Spanish language film in the 2010 festival, last year Mendoza-Carruth, a longtime festival supporter, arranged a special screening of the Argentinean film “Anita,” which earned the Audience Award for “Best International Feature.” This year, she wanted to take it a step further with a full-blown festival within the festival that will partner with La Luz Center and Nuestra Voz to reach out directly to the Valley’s Latino population.

“We want the festivals to have films that represent who we are as a community,” she said. “We Latinos have little opportunity to see films in Spanish from our own countries.”

“La Quinceañera” will reach out to a wider audience by taking place in Boyes Hot Springs at the Sonoma Charter School.

“Their theatre building, as well as their location in the heart of where the Latino community live, are a perfect fit,” Mendoza-Carruth said, adding that childcare will be provided during the festival to better allow parents to enjoy the films.

Whenever possible, the filmmaker, actors or producers will offer question and answer sessions after the screenings. Each film, presented in Spanish with English subtitles, will be offered for $1 a ticket, with one- and two-day packages offered as well.

“We’re taking affordability out of the equation. I am very excited about all of the new people who will be able to access the film festival,” Mendoza-Carruth said, adding that she will be looking for individuals and businesses to sponsor the cost of screening a film in order to keep the prices affordable for all patrons.

In recent months, Mendoza-Carruth has been scouring festivals around the country that celebrate Latino filmmaking, specifically the Latino International Film Festival in Los Angeles and the Vancouver Latino Film Festival, from which she amassed a collection of 15 films that speak to a variety of Hispanic experiences.

Some of the films being offered include:

• The Cuban film “Chico and Rita,” which is nominated for Best Animated Feature at the Feb. 26 Academy Awards, will be screened at “La Quinceañera.” The film follows a jazz pianist and singer, whose tumultuous relationship unfolds against the chaotic background of the Cuban revolution. Traveling from Havana to New York, Las Vegas and Paris to follow their musical dreams in the 1940s and ’50s, the couple eventually learns that they need each other to make true music. Directed by Fernando Trueba, with exquisite animation from artist Javier Mariscal, the film’s soundtrack by Cuban composer Bebo Valdés sets the film apart, offering a true taste of Latin jazz mixed with classics by legends such as Cole Porter and Dizzy Gillespie. “Chico and Rita” won Best Animated Film at both the European Film Awards and the Goya Awards.

• Chilean filmmaker Orlando Arriagada offers extraordinary insights into what happened after the 33 Chilean miners were rescued with “Detras del Milagro (Beyond the Miracle).” In a story that captured the world’s attention, the miners faced their own mortality during 69 days trapped 688 meters underground. Once freed, they faced new obstacles as international celebrities, where some flourished in the spotlight while others could never shake the ghosts that haunted them underground. This documentary explores four men’s experiences since surviving one of the most harrowing journeys imaginable.

• Using breathtaking filmmaking and very few words, the Spanish film “Entre Lobos (Among Wolves)” tells the remarkable true story of Marcos Rodríguez Pantoja, who at a young age was sold by his father to an old goat-herder. When the elderly man died, the child learned to survive with a pack of wolves that eventually accepted him as one of their own. Marcos spent 12 years without any human contact, and despite his later efforts, could never join society, instead preferring his world among the wolves. The film was written and directed by Gerardo Olivares, and its lead actor, Manuel Camacho, was nominated for a Goya Award.

• Heartbreakingly beautiful performances emerge in the Puerto Rican film “America … Ella se Atrevio (America … She Dared).” With painful honesty, the film tells the story of a woman who flees her Caribbean home for New York after her abusive husband takes their daughter away from her. Even thousands of miles away, she cannot fully escape the violence of her past. Directed by Sonia Fritz, the film has outstanding performances by lead actress Limari Nadal and Edward J. Olmos.

• While many know of Miguel Hidalgo from his actions during the Mexican War of Independence, it is only a small part of his story. The Mexican historical drama “Hidalgo, La Historia Jamas Contada (Hildalgo, the Untold Story)” offers a more personal account of his time as a priest in San Felipe Torres, where his progressive ideas raise the ire of the town’s strict, religious citizens. The film becomes a love story when Hidalgo meets Josefa Quintana, the woman he ultimately leaves the church to marry. Created to mark the bicentennial of Mexico’s independence, the film is a love letter to the people and places that shaped a nation.

“The 15 Spanish language films in the ‘La Quinceañera Film Fiesta’ are all compelling, strong films that have broad appeal to all audiences of all ages,” said Kevin McNeely, executive director of the festival.

The festival also includes more than 90 films from the United States and other countries, as well as the one-man show, “This Filthy World,” by cult director John Waters, in addition to the opening night gala, panels by film industry insiders and awards ceremony.

To get all the details, and passes, visit www.sonomafilmfest.org.

For the original report go to http://www.sonomanews.com/News-2012/Quinceaera-brings-Latin-flair-to-film-fest/

One thought on “‘Quinceañera’ brings Latin flair to film fest”