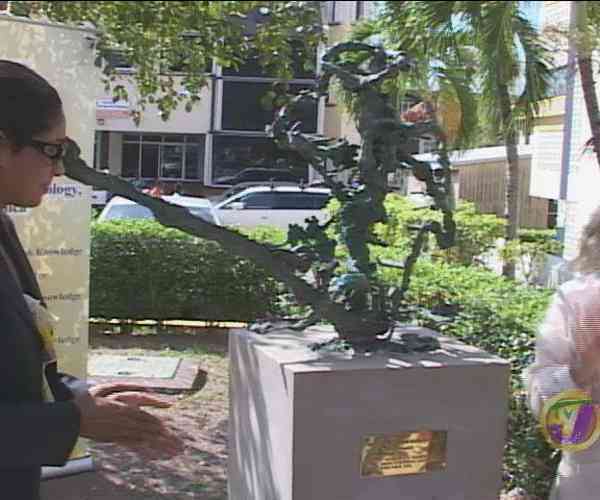 The University of Technology (UTech) on Monday (February 6), unveiled a sculpture of late Reggae icon, Robert Nesta “Bob” Marley, at its Papine campus in St. Andrew.

The piece, which has been erected in the institution’s Caribbean Sculpture Park, was designed by Russian sculptor, Gregory Pototsky, and presented as a gift to the institution and, by extension, the government and people Jamaica.

The unveiling of the Bob Marley sculpture coincided with the 67th anniversary of the late Reggae exponent’s birth, and was one of two pieces formally presented to UTech. The second was a sculpture, dubbed: “People’s Organism”, designed by Jamaican artist and Edna Manley College for the Visual and Performing Arts (EMCVPA) alumnus, Warren Buckle.

Youth and Culture Minister, Hon. Lisa Hanna, in welcoming the gesture by Mr. Pototsky, noted Bob Marley’s focus and commitment to uplifting the ordinary person, through Jamaica’s foremost cultural and musical art form, reggae. She said the late musician had touched and inspired the lives of millions globally, including Mr. Pototsky, adding that “his legacy lives”.

Ms. Hanna said the sculpture would be as a lasting monument between the people and governments of Jamaica and Russia, noting that it “will stand as a lasting reminder of our friendship and cooperation”.

The Minister also commended UTech’s input in the undertaking through, among other things, facilitating its erection in the Caribbean Sculpture Park. She urged the institution to build on the Marley legacy by ensuring that students have an outlet for “putting their talent to work”.

“As we confront the challenges in our fiscal space, we must reflect on the need to put in place, systems to bring greater prosperity to our people, especially our young people, and unearth the fire in them that drives them to reach higher and to do more. We must learn from the achievements of Bob Marley to, first, believe in our culture, and then invest in its capacity to transform our lives and create wealth among our people,” she asserted.

The Culture Minister also stressed the need for the nation’s abundant budding young talents to be provided with the infrastructure that will facilitate their creativity while yielding them economic success.

“You, at the UTech, with your emphasis on innovation and entrepreneurship, can help to lead the way in creating systems and programmes to foster sustainable prosperity among our young people, using art and culture. At UTech, you should be allowed to dream, as young people, and know that your dream can bring you cultural and economic success. Let us make our lives count, Bob Marley did just that,” Ms. Hanna said

UTech’s President, Professor Errol Morrison, in welcoming the sculpture, noted that Jamaica was one of only 70 “privileged” recipient countries of sculptured artwork from Gregory Pototsky. He also expressed the hope that “the significance of this contribution…is not lost upon us.

In his remarks, Mr. Pototsky, through his interpreter, and wife, Olga, said the sculpture of Bob Marley, whom he described as “the great hero of Jamaica”, has demonstrated “our love from Russia to Jamaica”.

For the original report go to http://www.jis.gov.jm/news/leads/29755