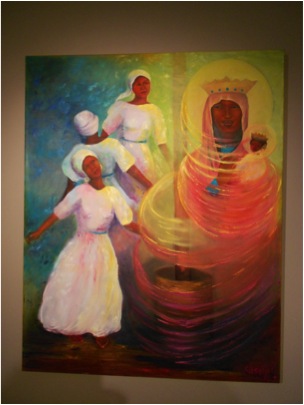 The Vincent D’Aguilar Art Foundation in Nassau, The Bahamas, is presently featuring Haitian artist Chantal Bethel’s “Poto Mitan,” a three-dimensional production of work she created in an attempt to find healing after the earthquake in Haiti. Bethel, who fled Haiti during the Duvalier regime, has created a vivid show across all media – from sculpture to painting.  The exhibition, which has received rave reviews, opened on January 17 and will remain until March 8, 2012. To learn more about her and the work, Caribbean Journal interviewed the artist to know more about “Poto Mitan,” the relationship between Haiti and the Bahamas, and how the two countries influence her work.

What brought you to do this show?  I grew up in Brussels, and I’ve been living in the Bahamas since 1971, which is quite a long time. This was etched in my memory for a long time after the earthquake happened. I decided that I needed to make art – that was my way of dealing with it. And the first piece I actually did is not here – it was acquired by the Haitian Embassy in Washington. After that, I decided I should do a whole body of work. The first piece was “Poto Mitan,” which are the words for “Pole” and “Middle,” which is usually the centre of a voodoo temple and has the same connotation as the tree of life, which is the place where heaven meets earth in the voodoo religion. I decided to go there because voodoo is something I was always afraid of – as a child, when I grew up, it was taboo in my family. I was raised as a Roman Catholic. So I met a Haitian artist who lives in Florida, [Edouard] Duval-Carrie. He presented the Haitian mythology in a very nice way – he had a talk [in Nassau] and said that since all the Haitians are leaving Haiti, the gods should leave as well, so he put them on a boat and sent them to Miami. So you saw the goddess of love in Miami Beach [in his work], so it gave me a different feel. [. . .]

How much does Haiti influence your work?  I am told that you can see Haiti in my work. But sometimes it looks very Bahamian. In this particular body of work, Haiti is very strong, because of what I’ve used – I’ve been inspired by the voodoo religion, using all of the masks. The calabash, which is a very spiritual fruit in many religions, in Haiti is used by a lot of people to carry water to drink. And the calabash is actually a gourd – which is why the Haitian currency was named for a gourd by King Henri-Christophe – and that’s why I’ve used it in this show because it’s very strong in Haiti. 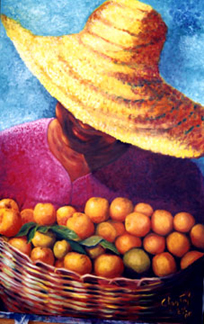