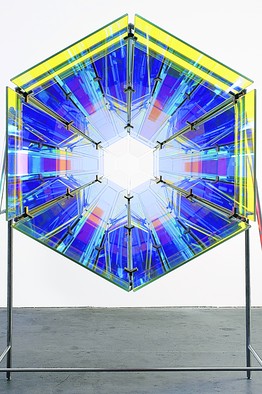 Miami collector Ella Fontanals-Cisneros was 14 years old when she and her family fled the political upheaval of Cuba’s revolution, but now she—and part of her acclaimed collection of contemporary art—are headed home, Kelly Crow reports in The Wall Street Journal.

This week, Ms. Fontanals-Cisneros said she’s planning to send around 85 pieces from her vast art collection to be exhibited in Havana’s National Museum of Fine Arts in May. The exhibit, “Multiple Views: Selections from the Ella Cisneros-Fontanals Collection,” will open May 12 to coincide with the 11th Havana Biennial, a citywide survey of new art trends.

Her collection, which she began in the 1970s, is well known for its holdings in contemporary photography, geometric abstraction and video art, so the resulting show reflects this diversity. (She displays works in her private museum in Miami, and the Cisneros Fontanals Art Foundation is planning a museum for her art in Madrid.)

One of the largest pieces headed to Havana will be Ai Weiwei’s towering circle of 75 interlinked bicycles from 2003, “Forever Bicycles.” Other highlights will include Olafur Eliasson’s oversized glass-and-mirrored sculpture, “Blue Double Kaleidoscope,” from 2005, and Barbara Kruger’s 1984 photograph of a hand caught in a net, “Untitled (We Are Objects of Your Suave Entrapments).”

Curator Osbel Suárez also included several works by Latin-American artists like Rafael Lozano-Hemmer, whose video, “Surface Tension,” zooms in on the image of an eyeball that’s been computer programmed to follow viewers around the room. Also on view will be Cuban-American performance artist Ana Mendieta’s haunting 1975 film, “Rock Heart with Blood,” which shows the artist lying in a self-dug grave. New York-based performance artist Marina Abramovic has signed up to participate in a lecture at the museum, Ms. Fontanals-Cisneros added.

Collaborations between Cuban museums and collectors from the Miami diaspora are rare, but Ms. Fontanals-Cisneros said she wanted to “build bridges” with Cuba’s art lovers and give them a chance to see “art they rarely have access to.”