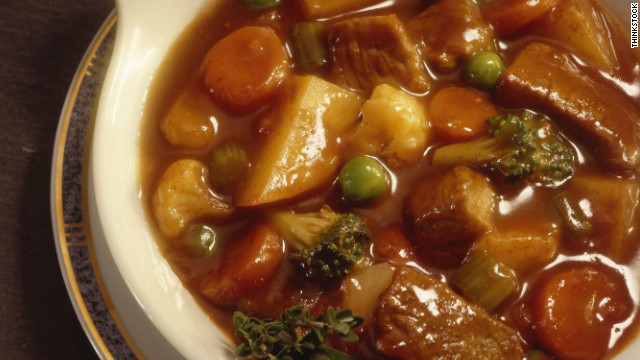 There’s a reason why January is National Soup month – we can all use a steamy bowl to ward off the chill and the sniffles. And there certainly is no shortage of soups to keep variety in your winter diet, as Lari Robling reports for Newsworks.

Everybody knows about the old standards – tomato and chicken noodle.  But not as many people are familiar with pepper pot, a spicy soup that’s been identified with Philadelphia since the colonial era.

Cheese steaks, hoagies and pretzels have long been on the list of Philly’s signature foods. And before they came on the scene, way back in revolutionary times, there was Philadelphia Pepperpot soup.

That was the cry of nineteenth century street vendors selling this African/Caribbean soup in Philadelphia that likely came to the city with enslaved people who were brought to the city. The soup was common, sold up and down Market Street at stalls. A famous painting in Philadelphia Museum of Art depicts a black woman selling steaming ladles full of soup.

Flavored with plenty of black pepper, tripe and dumplings it was cheap and hearty.  The ingredients were readily available.   It’s rumored to have sustained Washington’s troops on that fateful winter at Valley Forge.

Pepper pot, smokin hot, became the slogan for Campbell’s Philadelphia Pepperpot condensed Soup. John Faulkner, director of brand communications at Campbell Soup Company said the product had a long company history and was made by the company for 110 years. “Originally the soup sold for 12 cents a can, we advertised 21 soups for 12 cents for many, many years”.

The soup got its name from a generous amount of whole black pepper, but Faulkner said many ingredients combined to give it a rich taste including “a blend of marjoram, thyme sweet pimentos, diced potatoes, delicious honeycomb tripe, and a generous supply of macaroni dumplings and these were all combined with the special touch of Philadelphia’s Pepperpot cook.”

As regional tastes changed, so did the popularity of pepperpot soup.  In 2010, Cambell’s discontinued the flavor although canned versions of the soup are still manufactured and sold in Canada.

While the convenience of Pepperpot soup in a can may be gone, interest in this historic dish remains alive.  At a recent Festival of Forgotten Foods held at Reading Terminal Markets, newcomers lined up to give it a try.

Taste tester Brian Sullivan gave it a thumbs up. “It looks very nice. It’s got a nice looking broth to it, big carrots big chunks of meat, very rich.

When he was informed that the meat was tripe – the stomach lining of a cow – he was surprised but remained diplomatic in his review.  “I haven’t had a lot of tripe in my life”, said Sullivan.

Jack McDavid of the Down Home Diner, and purveyor of pepper pot soup, says unless you are an old-timer, tripe doesn’t automatically conjure up deliciousness.  “After you get over the initial shock people who try it like it, they say it’s tender, it’s got a wonderful flavor and texture.  Sometimes the first time you see something you say ohh no but once you try it you like it.”

Which was exactly Sullivan’s response, once he got over his surprise, “No it’s delicious and the tripe is tender”.

While the heyday of Pepperpot Soup may be gone, you can find it on the menu at Philadelphia’s City Tavern and MdCavd at Down Home Diner will sometimes cook up a batch for special occasions.

And in the art world it still a superstar. Six years ago an Andy Wharhol painting of a Campbell’s pepperpot soup can sold for almost 12 million dollars.

If you’d like to give the soup a try, the recipe below is adapted from Joe DiGironimo, CFE, FMP
JNA Institute of Culinary Arts, (with permission).

Caramelize the mirepoix  (diced onion, celery and carrots) in the butter or oil. Add the beef broth, tripe and veal.

Add potatoes, green pepper, and sachet. Simmer until the vegetables are tender and the soup is adequately flavored. Degrease if necessary. Remove and discard the sachet.

Prepare spaetzle, push into the simmering soup. Simmer until it floats to the top, about 3 to 5 minutes or add cooked macaroni.

For the original report go to http://www.newsworks.org/index.php/art-entertainment-sports/item/33166-celebrate-soup-month-with-phillys-historic-pepper-pot-soup