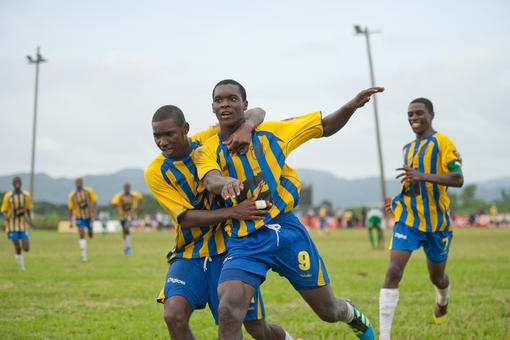 Rusea’s High schoolboy, Brian ‘Rambo’ Brown Jr, could be on the verge of making a dream move into the ranks of professional football when he departs for England later this week, Nodley Wright writes in the Sunday Gleaner.

The 19-year-old will depart for England on Thursday to begin a three-week trial stint with Premier League Club Aston Villa. Brown’s time with Aston Vila means that he will have to pull out of the Reggae Boyz’s training camp later this week in preparation for three friendly matches in February.

“He was invited to the national squad, but we had to inform them that he will be leaving the island for a trial in England,” confirmed Anthony ‘Follies’ Williams, Brown’s coach at Rusea’s.

“Brian (Brown) will be at Aston Villa where he will remain for about three weeks. They have requested his presence and will be responsible for his airfare, accommodation and everything else,” Williams explained.

News of the expected departure of schoolboy football’s most prolific scorer in schoolboy football over the past two seasons and the leading all-time goal scorer for Rusea’s High for Aston Villa will come as a surprise to many who were told at the end of the schoolboy season that Brown would be concentrating on his academics. Brown was said to have turned down opportunities from a number of Red Stripe Premier League clubs, including Montego Bay United.

“There were a lot of local offers for him from Red Stripe Premier League teams as well as scholarship offers from American universities including Harvard. He was more focused on getting an education, so he decided to stay with his local club, Montpelier, while focusing on qualifying himself academically,” Williams confirmed.

Williams is happy for the player he has nurtured into a top-quality player and one who was a thorn in the flesh of opposing defenders in the just-concluded schoolboy football season, finding the back of the net 38 times and over 60 for the past two seasons.

“Based on the circumstances, it is a good move for him. I think he is set for great things and at 19 years old and with a big break such as this, it is now or never,” said Williams of the son of the former Seba United star of the same name, Brian Brown.

The powerfully built youngster who is known for his strength, speed, hard work and his ferocious left-foot shots will leave with the blessings of the school community, according to Williams.

“Brian Brown collected his particulars from the British High Commission last Tuesday and is due to depart the island on Thursday coming. The school community, the principal and everyone are very supportive of him and we know he will give of his best,” a pleased Williams said.

Last season, another Jamaican, Omar Cummings, had a successful trial stint at Aston Villa under the watchful eyes of then coach Gerard Houllier, but he was unable to take up the offer due to his failure to secure a work permit. Should Brown succeed at this club, he will join another Caribbean standout, Trinidad and Tobago’s Dwight Yorke, who moved to the club as a 19-year-old and shone for them before gaining super stardom at Manchester United.

For the original report go to http://jamaica-gleaner.com/gleaner/20120122/sports/sports23.html