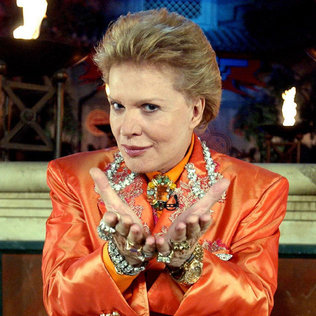 After a bout of pneumonia in Puerto Rico, the flamboyant prognosticator, 79, will be transferred to a medical center specializing in cardiovascular treatment, Sarah Moreno reports in The Miami Herald.

Popular Spanish-language astrologer Walter Mercado, currently known as Shanti Ananda, will be transferred from a hospital in San Juan, Puerto Rico, where he has been hospitalized since last week, to a medical institution on the mainland United States that specializes in cardiovascular treatment.

After passing out in the city of Ponce on Saturday, Mercado, 79, was hospitalized with complications from pneumonia.

“Although he had gotten better from the pneumonia, Shanti Ananda’s blood pressure had been fluctuating during his hospitalization,” a spokesperson with his publicist’s office told El Nuevo Herald.

“They have taken him more as a precaution than as a necessity. Doctors feel more comfortable with him in the Cleveland hospital, which specializes in heart disease.”

The transfer to the Cleveland hospital, which was not identified, was expected Wednesday night or Thursday morning. It was not immediately clear whether Mercado would be flown by air ambulance or on a commercial airliner.

The flamboyant astrologer, wildly popular in Latin America and whose daily horoscopes appear in El Nuevo Herald, will undergo a series of medical exams to determine how serious his blood pressure problem is.

The astrologer’s niece, Ivonne Benet Mercado, in a statement to Puerto Rico’s El Nuevo Día newspaper, said her uncle was responding positively to the treatment.

“He is healthy and takes good care of himself. His positivity and good mood help him,” said Benet.

A statement from Mercado’s office said he was in good spirits, communicative and “wishes everybody blessings and prosperity in 2012.”

Mercado appeared for years on Spanish-language television delivering his prognostications for his viewers.

Three years ago in federal court during a trademark dispute over his own name, he toned down his flamboyant look, arriving in a jacket instead of the colorful, flowing robes he typically wears in his public appearances. But his pockets were stuffed with amulets.

“I had a Ganesh. I had a Virgin. A rosary. The red cords of Kabbalah,” he said. “And a few other little things.”