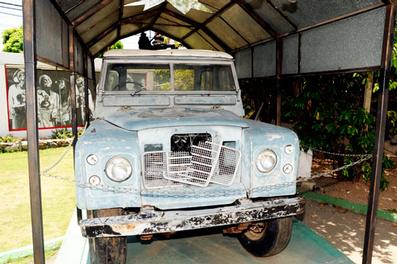 While reggae star Bob Marley owned more than one ride, his reported favorite was a 1976 Land Rover that Marley used to travel rural Jamaica. Following Marley’s death in 1981, his beloved Land Rover became a fixture at the Bob Marley Museum, located at the site of Marley’s former Jamaican home.
After 25 years on display, covered but still exposed to the elements, Marley’s Land Rover has seen better days. The paint is peeling and faded, and the broken grille hangs askew. Clearly undrivable in its current condition, the SUV is in bad need of restoration.
According to The Jamaica Star, that restoration is now in the works. The truck has been shipped to a local Land Rover dealer in Montego Bay, where it will be taken apart and assessed before a decision is made on the restoration process.
After 25 years in the elements, no one knows how extensive the work will need to be, prompting the local dealership to contact Land Rover’s headquarters for advice. Even if parts are replaced, the museum pledges to return the original parts to display.
Marley’s Land Rover has proven to be very popular with both visitors and museum staff alike. In fact, the museum’s general manager, Jacqueline Lynch-Stewart, called the SUV’s removal “very traumatic” for employees.
No one knows how long the restoration will take, but this much is clear: as soon as it’s finished, Bob Marley’s favorite ride will again be featured prominently at the St. Andrew museum.
For the original report go to http://www.motorauthority.com/news/1071804_no-land-rover-know-cry-bob-marleys-ride-heads-for-restoration