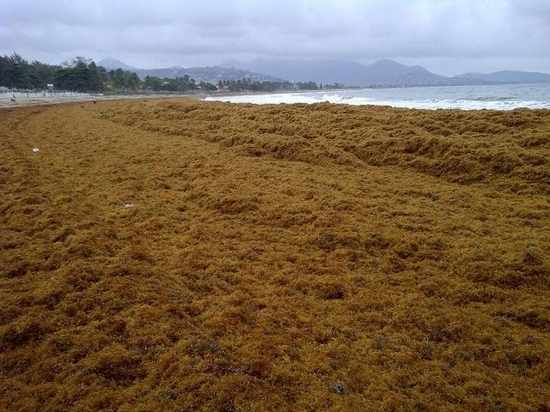 Dr Edward Harris writes about the unusual amount of dense and smelly weeds that covered beaches throughout the Caribbean this past year for Bermuda’s Royal Gazette.

It is common for a pile of it to wash up once a year for a relatively short period, but we have never in recent memory had so much of it for so long and seen such huge mats or lines of it from the air. Tanya Clovis-Howie, August 2011, remarking on Sargassum at Tobago, West Indies.

Last year, 2011, was not a good year for many people and for many reasons, not only in Bermuda but elsewhere as well, as the world economy continued to take a beating coupled with major overspending by a number of governments, especially in southern Europe. In seven months, the permanent settlement of Bermuda will be 400 years old and it is to be hoped that 2012 will be a better year for all here, giving further cause to commemorate, if not celebrate, such an anniversary. Last week, a fellow named Christopher Carter made a claim that he was the first Bermudian and first permanent human settler in this place; it is debatable if one person a country establishes, but anthropologists, historians and demographers (and usual contrarian locals) may have a definitive view.

Looking back, no reference appears to exist of any earlier anniversary celebrations in 1712, 1812 or 1912. It seems that the first time Bermudians thought to be commemorative was in 1909, marking, not permanent settlement, but the 300th anniversary of the sinking of the Sea Venture on July 28, 1609. That was followed by similar happenings for the 350th, 375th and 400th years of that event. The 350th anniversary was enlivened by the discovery the previous year in 1958 of the wreck of the Sea Venture by Edmund Downing, who had married into the Bermuda community and was an American descendant of Virginia governor, Sir George Yeardley, who was on the ship and spent ten months in Bermuda, 1609-10.

Of course, those are commemorations of a cultural heritage nature, of no interest to the beasts in the fields (there are a few cows, sheep and a lot of bull(s) still in Bermuda) or friends of a feather in the air. The latter in particular are more concerned with annual anniversaries, such as the coming of winter, the advent of spring and the season of hurricanes, to say nothing of daily rituals of the rising sun or setting moon or the waxing and waning of the ocean tides, which have been commemorated from time immemorial. One of the annual rituals is one we are now experiencing in amplitude – the coming ashore of Sargassum weed, parts of the grassy meadows of the Sargasso Sea, an oasis within an ocean and a sea without shorelines, similar in a metaphorical sense to the great Okavango Delta, which is a river without a watery terminus. It is a delta without a ‘sealine’, encased as it is in landlocked Botswana, creating an extraordinary ecosystem, like the Sargasso Sea.

The Sargasso Sea is exceptional geographically as it is created, sustained and contained, not by the shorelines of countries or continents, but by four of the great currents of the North Atlantic, the only land within its oceanic limits being Bermuda. The containment this year was interrupted, perhaps by hurricanes, and from West Africa to Aruba, it was a good year for weed, – Sargassum, that is – though it might have been a good year for the vernacular one, but I could not possibly comment nor inhale.

Moving clockwise, or westward, at the bottom of the Sargasso Sea, at six o’clock, the North Equatorial Current starts the ovoid trend of water round the North Atlantic. That feeds into the Antilles Current that joins the Gulf Stream around nine o’clock, which, being the mightiest stream in the world (without river banks) sends the water to twelve o’clock, where it is picked up by the North Atlantic Drift, flowing eastwards towards the Old World. From two o’clock or so, the Canary Current enters the race and carries the water downwards through three to six o’clock, to complete the circle by meeting with the North Equatorial Current. Those monumental eddies form the edge of a massive mixing bowl, or gyre, within which the Sargasso Sea is formed, an often quiet arena for the growth of its signature weed, Sargassum, now hitting the shores of Bermuda, the only dry land within that ocean within an ocean.

The weed, according to biologists, is a plant that is like a motel for the occupation of many types of animal life; it is the nursery for many fish and other marine creatures and in addition makes a great fertiliser. In days gone by, before we got too rich and could afford to go to Sousa’s for artificial food for our plants and gardens, Bermudians harvested a lot of Sargassum from the shoals of weed that came ashore in the late autumn and early winter. This year, as reported in the West Indies and elsewhere, there has been, for reasons unknown, a bumper crop of weed, but few are the takers of the bounty of the sea. Perhaps in serious error, due to its capacity as a bulwark against erosion of the dunes, the weed is now regularly cleared off public beaches, where mechanical devices can access the sands. Perhaps that has become a sort of pseudo-environmental “political correctness”, as we must have everything looking clean and tidy, even if we are assisting in the loss of the sand of the very beaches we are supposedly protecting.

Hopefully, the mounds of the stuff scooped up (with a lot of sand) are used for fertiliser, but one suspects it is simply another major accretion to the Marsh Folly Mountain. The rotting weed in the sea, if stuck in a bay or harbour, gives off hydrogen sulphide, causing one elite hotel in Antigua to close for a month late last summer. Of late, the Bermuda Government and a coalition of organisations have formed the Bermuda Alliance for the Sargasso Sea (BASS) to promote the protection of the great natural heritage of that sea. Some perhaps would like to see that “ocean with an ocean” declared a World Heritage Site by UNESCO: it is a worthy cause.

Sargassum weed is a part of the heritage of Bermuda, predating human occupation by many thousands, if not a million or so, years. Unlike the cultural heritage, some of which is going bad on the vine, perhaps it is time to return to the old tradition of leaving this heritage to rot on the beaches, to do its own thing for the betterment of dune ecology, and to return to the annual ritual of harvesting it to make better Bermuda bananas, to say nothing of onions, cedars and palmettos.

But like a lot of heritage, the gathering of seaweed is hard work, and for many of us now, so entitled in modern political times, hard work and “making do” (as habits of old a conservative people in the middle of nowhere on the edge of the Sargasso Sea) are no longer considered to be part of the long traditions that formed much of what we know as “Bermuda”, starting with the arrival of the first official settlers on the Plough, way back in early July 1612. Pity we cannot smoke the stuff, as it would save a lot of diesel cleaning up the ‘mess’ on the pink beaches