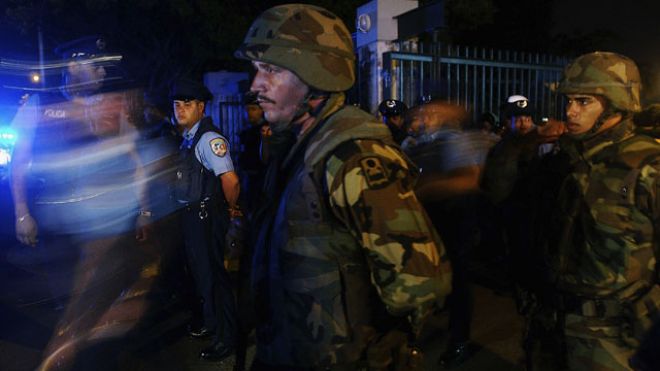 A police sergeant was murdered and a 15-year-old girl is hovering between life and death after being struck by a stray bullet during New Year’s festivities in Puerto Rico, which in 2011 experienced the most violent year in its recent history with 1,136 murders, The Latin American Herald Tribune reports.
Gov. Luis Fortuño decreed three days of mourning over the death of Sgt. Abimael Castro Berrocal, a traffic cop in the western city of Mayaguez.
“We’ll do everything we can to find the (culprit or culprits) in this murder and the full weight of the law will fall upon him/them,” said Fortuño in a press communique.
According to the authorities, Castro Berrocal died from two bullet wounds he received after stopping a vehicle on Sunday morning for an alleged traffic violation.
Meanwhile, Karla Negrón Vélez is in very serious condition in the San Juan Medical Center after a stray bullet hit her in the back of the head while she was celebrating the arrival of the new year at her home in the capital’s Villa Palmeras neighborhood.
Emergency room director Ernesto Torres told the media that Negrón Vélez had not been declared brain dead because the teen had reacted by pressing the hand of a relative.
Two other people were wounded by shots fired into the air during the New Year’s celebrations on the Caribbean island.
Puerto Rico, located on the drug smuggling route from South America to the mainland United States, has a per capita murder rate almost double that of drug-war-ravaged Mexico.
An average of three violent deaths per day, more than half directly linked to drug trafficking, has led Fortuño to ask U.S. federal authorities for help in quelling the violence.
The government of Puerto Rico, a U.S. Free Associated State since 1952, reported in early December in Washington the dimensions of a problem that, according to U.N. figures for 2008, gave the island an average of 20.3 murders per 100,000 residents.
San Juan authorities have reinforced their efforts in recent weeks to get Washington to pay the same attention to Puerto Rico as to Mexico, where in 2008 a rate of 11.5 murders per 100,000 residents was registered.

For the original report go to http://www.laht.com/article.asp?ArticleId=458247&CategoryId=14092