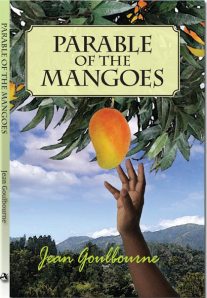 As poet and novelist, Jean L. Goulbourne writes about the distress, anger, struggle and creativity which she witnesses in Jamaican society from  the perspective of a historian and educator (she is a lecturer in History and Social Studies at Church Teachers’ College in Mandeville, Jamaica). Her writing is poetic, economical, pungent and stimulating, and she has received several writing awards. Goulbourne recently published a collection of short stories called Parable of the Mangoes (Abeng Press, 2011). Here are two book reviews, the first by Jean Small and the second by Amazon.com. We thank Peter Jordens for the information in this post.

The Jamaica Cultural Development Commission’s 2010 gold medalist for short-story writing, Jean Goulbourne, has wasted no time in producing her newest collection of stories, Parable of the Mangoes, published by Abeng Press.

Born in Black River on Jamaica’s south coast, Jean developed a keen eye and ear for all that happened around her in rural Jamaica. These 12 stories express a love of the land, a commitment to the development of the nation, and a sympathetic and compassionate understanding of the lives of a people whose ancestors experienced the harsh circumstances of colonization and slavery.

As a historian, Goulbourne has an academic knowledge of a society that is based on an Africa world view. She uses this knowledge to creatively explore the reality of the present cultural, political and societal issues without being pedantic. The simplicity of her language belies the depth of the central message of each story, making them, at the same time, accessible to all readers. The tree, as in African cultures, is symbolic of life firmly rooted in the ground. In these stories, the mango tree is a central image of strength transferred to a local context.

The journey from slavery to independence has been a long and difficult one, so that one needs to ask the question, as in ‘Massa Day Done’, if some of the conditions of the past are not still existent in the present. The prejudices against skin color and the acquisition of knowledge as in ‘The Naming of a Thing’ result in a deep-seated anger in a people that is shown through the vengeful action of the protagonist in ‘Mountaintop.’

Goulbourne forces us to look critically at our society, the bottleneck lives we may be leading, and provides an understanding of the historical sources of our pent-up emotions. She manages to incorporate her skills in writing poetry to produce a collection of stories that are a joy to read.

After you’ve read Hemmingway and Camus and seen how powerful simple language can be, you’ll be glad to have discovered Jean Goulbourne. Parable of the Mangoes takes simple occurrences such as a boy being punished for sharing with a neighbor across the fence and shows us that prejudice is not just racial. Or the father who’d rather go to his grave than attend the wedding of his estranged son because of the younger’s Rastafarianism. So many of the things that imprison and divide us are explored in her lyrical poetic way without sending us to the dictionary, meaning she doesn’t regurgitate a thesaurus.

These 12 stories were “written to represent a number of people who have been imprisoned in various situations over many years,” said Jean. “They seek to illustrate problems that people face: slavery, life in the ghetto, insanity, differences in religion, political differences, and many other forms of mental and physical imprisonment.”

Jean was born in Black River, on Jamaica’s south coast, one of the first places outside of the USA to have got a public electricity supply and maybe that’s one source of the spark – a historical pride in a History graduate of the University of the West Indies, who has published several poetry and prose collections and has been a James Michener Fellow at University of Miami’s Caribbean Writers Summer Institute Writers Program, and an Honorary Fellow, at Iowa International Writer’s program, University of Iowa. Most of her life has been spent teaching at all levels of the Jamaican schooling system and as an administrator in that system and it is amazing that she found time to amass a trove of literary awards including the 2010 gold medal for short story from the Jamaica Cultural Development Commission and the award for best adult short story writer.

Reward her again with some of your time.

For the original review, see http://www.amazon.com/Parable-Mangoes-Jean-L-Goulbourne/dp/0986725323.

For more about Jean L. Goulbourne, see her profile on Peepal Tree Press’ website which includes reviews of Excavation and Woman Song: http://www.peepaltreepress.com/author_display.asp?au_id=25.

One thought on “Parable of the Mangoes, a new collection of short stories by Jamaica’s Jean Goulbourne”