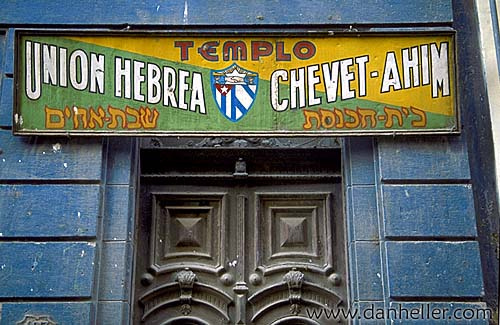 Kyle Koeppel, a student at Benjamin N. Cardozo School of Law and a Vice Chair of UJA-Federation’s Generosity Leadership Board, reports on a recent trip to Cuba for thejewishweek.com.

It is often difficult to sustain certain things in life. Relationships end merely because one friend does not return another’s phone call, and the ability to use a language may be lost if we don’t use it every day.

But my recent trip to Cuba proved how remarkably resilient some things can be. The Jewish community there was able to withstand 30 years of silence, only to grow stronger.

When traveling to Cuba with UJA-Federation of New York, our group was astounded to find a vibrant Jewish community flourishing in a country that had outlawed religion for 30 years. Under the first decades of Fidel Castro’s Communist regime, there was no place for religious practice. It was not possible to be both religious and a communist.

Where the Jewish community had once flourished, with tens of thousands of Jews living in Cuba prior to the Revolution, the Castro administration’s policy led that number to dwindle to as low as an estimated 800 in 1989. Like the Spanish Jews after the Inquisition, some Cuban Jews chose to continue their religious practices underground.

In 1991, the Cuban government allowed organized religion again and the Jews of Cuba began to rebuild their community.  Rebuilding would involve a lot of learning and the fortification of a united community. With the financial support of UJA-Federation here and many other federations across North America, as well as other Jewish groups, the American Jewish Joint Distribution Committee (JDC) has helped the Jewish community of Cuba come back to life in a powerful way.

Like many other Jewish communities throughout history, the Jews of Cuba would not let their religion be forgotten. We spent much of our time in Cuba learning about the ways in which the community has reeducated its population and reinvigorated Jewish traditions and ceremonies.

During our time with the congregants of the Patronato Synagogue in Havana, the passion and love they have for their religion was obvious. It was heartwarming to see that services there did not seem like a chore, but rather a privilege and also fun — singing and dancing were encouraged. On Saturday night as they welcomed the end of Shabbat, young congregants enjoyed dancing in the basement of the synagogue. The joy with which Jewish rituals were performed was great.

In a poverty-stricken country where most citizens live on ration cards and fixed incomes of approximately $30 a month, one would expect to find downtrodden residents with hopeless demeanors. Though we encountered members of the secular community in Cuba who fit those expectations, the Jewish community was anything but what we imagined. While life in Cuba is clearly not easy, the Jews we met expressed to us what a meaningful difference the three synagogues in Havana make in their everyday lives. The programs, including Sunday school for both children and adults, generous Shabbat dinners for the entire community and a free pharmacy with medical supplies donated by members of the North American Jewish community, exponentially improve the day-to-day quality of life for Cuban Jews.

The world Jewish community, with the New York community as an important part, has helped the Jews in Cuba in immense ways.  For 20 years, JDC’s aid, largely because of donations to UJA-Federation of New York and federations elsewhere in the United States, has been enhancing the lives of Cubans. The communist system makes assistance difficult, but community has been rebuilt. We have made possible the distribution of food and medicine to the Jewish community, as well as home repair for the elderly. We have helped bolster Jewish schools, study groups and community holiday celebrations, and bar/bat mitzvah programs have been strengthened.

Why should we as Jews outside of Cuba care about what happens to the Jewish community there? We should care because we are a people who stick together.

What was most moving to me was seeing the spirit of the Jewish community in Cuba, and the members’ ability to be reborn after 30 years of silence. Despite their long-term ability to practice their religion, or in many cases even know about it, I felt as though I were spending time with Jews who had spent as much time around the Jewish religion as I have. While anti-Semitism does not exist in Cuba, the importance of Jews practicing religion and tradition is the same as it is around the world. We must pass the lessons, history, and tradition of our people to the future generations.  Being Jewish is about more than just a title. It is something to be proud of, and seeing that amongst the Jews of Cuba was unforgettable. The Jews of Cuba reminded me how important perseverance is, and how meaningful a united community with shared values can be.

On our last night in Havana, we celebrated Havdalah with members of the Cuban Jewish community through prayer and dance. Following the conclusion of prayers, we joined the synagogue’s dance troupe on stage. We were reinvigorated by their spirit and commitment. As I sit here in New York pondering our experience, tears come as I recall watching our group dancing with them. It was clear that despite how different our lives are, in our Jewish lives we are united by shared values and experiences. We often take for granted the lives we lead in New York, where we have always had the freedom to practice our religion. It was truly inspiring to witness the strong bonds between Jews who had not been able to practice for many years. The resilience of the Jewish community was palpable.

Adella Dworin, the president of Cuba’s Jewish community, described Jewish life as “the cigar that wouldn’t go out.” Though stifled for 30 years, the Jews of Cuba are rebuilding their legacy in their community, and we all felt so proud to be a part of global Jewry that has helped. n

For the original report go to http://www.thejewishweek.com/editorial_opinion/opinion/jews_cuba_cigar_wouldnt_go_out

Photo by Dan Heller at www.danheller.com

One thought on “The Jews of Cuba: Like a Cigar That Wouldn’t Go Out”