“WE both like Spanish, or Puerto Rican, coffee,” the artist Rafael Ferrer said, referring to his wife and himself, as he prepared a strong cup for a recent visitor to his snug but airy home here. “It’s not the beans,” he said. “It’s how you make it.” Much the same might be said of Mr. Ferrer’s art over the decades, created at times from such seemingly unpromising materials as dead leaves, blocks of ice, paper bags, slate blackboards and gourds—as Karin Lipson writes in The New York Times.

His paintings on canvas of tropical scenes, deep-shadowed and vaguely disturbing — the word “hallucinatory” has popped up in descriptions — suggest his Puerto Rican roots.

At 78, Mr. Ferrer, who was out of the limelight for years, is on a roll. A retrospective last year at El Museo del Barrio in New York, part of its series for mature and under-recognized artists, received mostly glowing reviews. Mr. Ferrer “is finally having his moment,” Roberta Smith wrotein The New York Times, praising his “instinctive facility for color and materials of all kinds.” The retrospective, she wrote, was “almost criminally overdue.”

Now, Guild Hall in East Hampton is keeping up the momentum with “Rafael Ferrer: Contrabando,” an exhibition of paintings, sculptures and assemblages from the 1970s to the present. The show, organized by Esperanza León, a guest curator who is on the board of Guild Hall, remains on view through Jan. 16.

There’s more in the wings. The Lancaster Museum of Art in Pennsylvania will display his works on paper next spring. And a monograph on the artist by Deborah Cullen, El Museo’s director of curatorial programs and the organizer of last year’s retrospective, will be published by the UCLA Chicano Studies Research Center Press in 2012.

The belated attention scarcely seems to faze Mr. Ferrer, who has experienced both renown, from the late 1960s into the ’70s, and decades outside the mainstream. “I am blasé about fame,” he said.

Still, the renewed interest “gives me an opportunity to put things in perspective, to clarify the misunderstandings” — about the sources and the nature of his art — that have dogged his career, Mr. Ferrer said.

Born in 1933 in San Juan, P.R., to a well-to-do family, Mr. Ferrer was sent to the mainland for his education. The summer after his freshman year at Syracuse University, he stayed with his half-brother, the actor José Ferrer— more than 20 years his senior — and José Ferrer’s wife Rosemary Clooney in Hollywood. 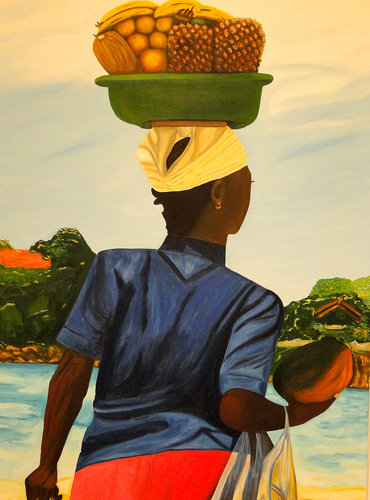 “I used to drive Rosemary to the studio, where she was making ‘White Christmas.’ And Joe was filming ‘The Caine Mutiny,’ ” Mr. Ferrer recalled. “And one day he said to me, ‘You know, fame — it’s an empty shell; there’s nothing to it.’ ”

Not that Mr. Ferrer was interested in acting. Music, specifically Afro-Cuban percussion, had fascinated him since he began playing the drums while attending a military academy in Virginia. As an adult, Mr. Ferrer was a professional drummer before turning full time to art.

His interest in visual art was spurred in part by a 1954 summer trip to Paris, where he met Surrealist artists and writers.

“That was what turned me on,” Mr. Ferrer said.

Making art privately at first, he traveled between New York and Puerto Rico, settling in Philadelphia — “it was inexpensive,” he said — in 1966.

In 1968 came the guerrilla action that put him on the radar: With 87 bushels of autumn leaves in a pickup truck, he drove from Philadelphia to New York, scattering them at three contemporary art venues.

“It’s about something appearing where it doesn’t belong,” Mr. Ferrer said of that stealth move long ago. Soon he was fielding calls from European curators for international shows, and exhibiting at the Whitney Museum of American Art, alongside major Conceptual artists; in 1969, he famously installed large blocks of ice at the entrance ramp to the Whitney, allowing them to melt.

But eventually, Mr. Ferrer said, his courtly manner growing feisty at the memory, the art world “avoided” him as he moved among styles and materials.

That restless sensibility is one reason “he is not a household name,” said Edward J. Sullivan, a professor of art history at New York University and an expert in Latin American and Caribbean art. “He has such a diverse trajectory, he goes off in so many different directions, he’s almost too inventive for his own good.”

Ms. León, the curator of the Guild Hall show, said Mr. Ferrer’s bicultural background may also have contributed to his marginalization. “It’s that problematic situation of being from two places, and not fitting into either one,” she said. (Ms. Smith, in The Times, said “his sometimes bristly personality” may also have undercut his career.)

“I’ve always had a minority of people who love what I do,” he said, “and they’ve been very generous with me.”

These days, he works out of the Greenport home that he and his wife, Françoise (known as Bunny), bought in 1999, building a studio in the backyard. In the house, a scene painted in the Dominican Republic in the early 1990s hangs over the couch: The Edenic setting, at a jungle pond or river, lures us in; but the glare of its human figures is unsettling.

For the original report go to http://www.nytimes.com/2011/12/18/nyregion/rafael-ferrers-work-is-finding-many-audiences.html