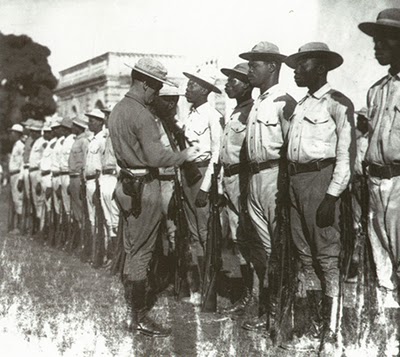 “The Constitution is a piece of paper. This gun is what talks.”

“If Aristide returns, we’ll eat him up.”

“We’ll kill everybody and reduce this country to ashes!”

These statements are from the Forces Armées d’Haiti (FAd’H), a professional army that has never shown any respect for Haiti or the lives of ordinary Haitians. After all the crimes of the FAd’H, a violent spit to the ground would seem a more appropriate reaction to the words “Forces Armées d’Haiti” than any thought of a civil discourse about reviving such a body.

Yet Michel Martelly has revived this discussion, and some of the funds he is requesting to raise his “new” army are meant to cover back pay for this army of bandits. For those who never knew or forgot the crimes of the FAd’H, this masterful video by Kevin Pina should serve as an excellent introduction or reminder.

The army of Haiti’s Slave Revolution was a militia army – a decentralized army in which every able-bodied man in the country was serving. The FAd’H is a professional army that has never repelled a colonial invasion. It has never been a revolutionary army – not even in its most distant past. It is a relic of a predatory army trained by the racist 1915-1934 U.S. occupation and then refined by subsequent military dictatorships – especially those of Duvalier father and son from 1958-1986.

Pina’s film gives us a glimpse of the Haitian elite during the ‘50s and then expertly guides us through the army’s reactions as a hopeful Haitian people tries to reclaim its birthright after uprooting Duvalier in 1986.

We witness the attempted coup in January 1991 between Aristide’s election in December 1990 and his inauguration in February, the army’s resistance to efforts to bring to justice those criminals from their ranks, the attempts by President Jean-Bertrand Aristide to accommodate the army, the successful coup of September 1991, and finally the return of Aristide and his disbanding of the FAd’H in 1995.

Along the way, we are reminded that the argument that all is permitted for the sake of stability and attractiveness to corporate investors is often a prelude to brutal acts of repression. We see how the FAd’H has consistently served the elite, whether this was to disenfranchise the masses, terrorize activists and parliamentarians, or enforce the stranglehold of Haiti’s wealthy families on commons lands.

It is so easy to kill, and Haiti has lost so many brave and good ones to these bandits. There is a fierce love that says, “No! We will allow no more of this!”

The same love that said at the Bois Cayman, “No! We will make no more slaves!”

That love is ever alive in Haiti. As President Aristide says in the video: “Hope and justice cannot be killed …. We will be celebrating love in Haiti again.”

Dady Chery grew up at the heart of an extended working-class family in Port-au-Prince, Haiti. She emigrated to New York when she was 14 and since then has traveled throughout the world, living in Europe and several North American cities. She writes in English, French and her native Créole and holds a doctorate. She can be reached at dc@dadychery.org. This story first appeared on her blog, Haiti Chery.

For the original report go to http://sfbayview.com/2011/harvest-of-hope-kevin-pina-documentary-on-haitian-army-with-review-by-dady-chery/