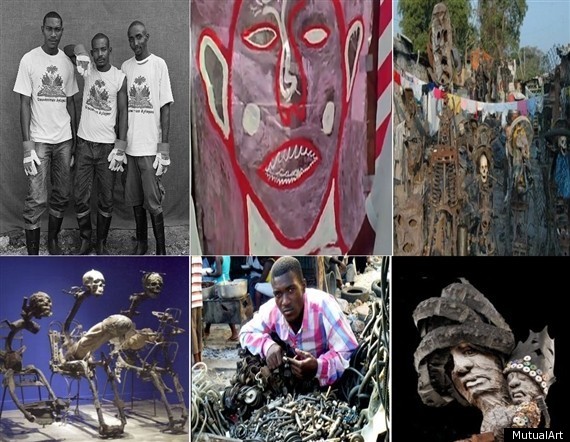 In December 2009, a group of local and international artists presented at the first-ever biennial in the Haitian capital of Port-Au-Prince, mixing art with street culture in the cleverly-captioned “Ghetto Biennale.” This inventive art fair boldly bucked tradition with it’s unique approach to art as community rather than commodity, and lent a fresh perspective on the magic behind the creative process. The event was the embodiment of its slogan, which begs the question, “What happens when first world art rubs up against third world art? Does it bleed?”—asks MutualArt writer Lauren Meir in this piece for the Huffington Post.

Less than a month later, Haiti was devastated by one of the worst earthquakes in the region’s history, claiming the lives of nearly 100,000, and leaving over one million people homeless. With the poor infrastructure of the majority of the buildings, much of the country was reduced to rubble.

Emerging out of such horrific destruction is yet another example of the transformative and inspiring power of art. The Ghetto Biennale triumphantly returns to the region from December 12-18, featuring Haitian and visiting international artists working and exhibiting side-by-side. “In my opinion the Ghetto Biennale is as much, if not more about the process of art-making, especially under extreme conditions such as infrastructural collapse,” says first-time GB exhibitor Crystal Nelson. “Artists are expected to make work once they arrive in Port-au-Prince, which makes anything we make a direct and immediate response to the site…it’s site-specificity in the truest sense of the term.” Peter Andersen, another artist showing for the first time at the Biennale, agrees: “This event is totally unique in its location among the Atis Rezitans’ workshops and homes. There is no comparison to any other clinical art fair,” he said. The vetting committee reviewed artist applications last spring, with preference given to the artists who exhibited at the inaugural event in order to strengthen the creative relationships forged at the 2009 fair.

Hosted by Atis Rezistans, a collective of artists living off the Grand Rue in downtown Port-au Prince, the second edition of this truly unique biennial is a collaborative effort, a living work-in-progress that alludes to the resilience of the artists residing there. Co-founder Leah Gordon is back curating the show for the second time, along with artist and founder Andre Eugene, artist Celeur Jean Herard, and assistant curators Marg Duston and David Frohnapfel.

In addition to talking to several participating artists, MutualArt was able to speak with Gordon about this one-of-a-kind show, which she says is both a response to the traditional biennial and a reconciliation between conflicting forces in the art world. “We wanted to see what happens when arts practices from widely varied social and economic backgrounds came together,” she says. “The experiment was to put two extraordinary, incongruous, and almost mutually exclusive, words together…Ghetto and Biennale.”

The Biennale was founded on the hope that the event would be what writer John Keiffer called a “‘third space’…an event or moment created through a collaboration between artists from radically different backgrounds.” This term is an appropriation of “third world,” in an attempt to construct an independent nation of sorts with a fresh, ‘third world’ perspective on cultural, economic, and global issues. “We want the Ghetto Biennale to start a dialogue about a third space in the art world,” Gordon stated.

Many of the works exhibited at the first edition were constructed from “waste” and recycled materials. One such example is Jesse Darling’s Trash Church, which she was inspired to create at the Biennale, but only after reformatting the entire concept. As the artist explained, “I’d conceived of building my piece, Trash Church, out of “waste” – but when I showed up I quickly realized that I’d made a terrible mistake: there is no such thing as waste in the wasteland…Haiti is the wasteland of Western culture and therefore the spiritual home of bricolage and magical thinking – even voodoo, not a “religion” so much as a system of building faith and community.” Thus with the aid of local residents, Darling’s elaborate Trash Church was realized, re-defining both the concept of religion and community, as well the creative process of the work itself. As she tells it, “The experience was unlike participating in any other art fair in that there was no white cube, no neo-liberal politics of participation, no health and safety checks, no reverent art-audience walking silently around a space drinking wine. Plan A went out the window; so did plans B and C and D. I had to do what too few artists are ever required to do nowadays: respond to place and situation.” That seems to be the supporting idea behind the biennial, which defies the standard venue and takes the event to the site-specific streets, utilizing materials on-hand to create innovative works.

The use of trash as treasure takes the spotlight once again in this year’s Ghetto Biennal; it’s one of the most important forms of media for the core group of artists working in Haiti. Gordon says that this is the artist’s way of re-appropriating the art world. “Atis-Rezistans use recycled materials and transform the detritus of a failing economy into deranged, post-apocalyptic Voodoo-inspired totems. But their work is not just dealing with the re-appropriation of junk and Haitian culture,” she elaborates. “Another important part of their practice is the re-appropriation of the bourgeois art world institutions. [Curator and Co-founder] Andre Eugene has named his yard “A Musee d’Arte” declaring that not only the bourgeois can have galleries and museums.” This concept of reclaiming art institutions was another contributing factor to the formation of the Ghetto Biennale.

Returning artist Laura Heyman’s work reflects this thread about systems with her photography piece focusing on local residents. “The organizers of the Biennale are posing a series of questions about art and globalization, specifically, who is able (and allowed) to participate in a global network of international biennials that have become so central to the current art market,” she explains. For the first Biennale, Heyman opened up a makeshift photography studio and darkroom in a courtyard of the city, and developed the portraits she captured on film. “What most concerned me was how the context of the images might change once they were removed from their original environment. I was intensely aware of everything that stood in the way of a real exchange between myself and anyone who might choose to sit for a portrait; race, class, opportunity and lack of opportunity, the ability to move freely through the world.” Heyman has returned to Haiti several times between the first biennial and the present. Her ongoing portraiture project continues for round two of the biennale, expanding on the core themes of the event.

“The Ghetto Biennale is very direct in confronting questions of race and class in the art world, and investigating these issues by facilitating interactions between “first world” artists and “third world” artists,” she says, reiterating Gordon’s thoughts on the subject. A biennial is a platform for global and social change within the art world – including a redefinition of what that means in a cultural context. “The Ghetto Biennale is trying to put a new twist on the decentralization of the Global Art World, and connect the Haitian artists from lower classes to an international, artistic field, to narrow the still existing gap between periphery and the metropolis,” the curator maintains. Part of this mission includes a new section of the fair, an exhibition called “Nouvo Rezistans,” which presents the works of emerging artists from the Grand Rue neighborhood.

Promotion of this oft-overlooked art scene is the driving force behind the Biennale, but perhaps the conflicting forces at work are part of what makes it such a cutting-edge event. “The creativity of the Ghetto Biennale is as much about broken dreams as realised fantasy,” Gordon says. “There is a rapid entropy and deconstruction of ideas, projects, ideals that takes place on entry to Port-au-Prince and the Ghetto Biennale, and it is at this level creativity has to really take place to struggle against the disorder and chaos.”

For the original report and a photo gallery go to http://www.huffingtonpost.com/mutualart/post_2736_b_1147691.html?ref=arts