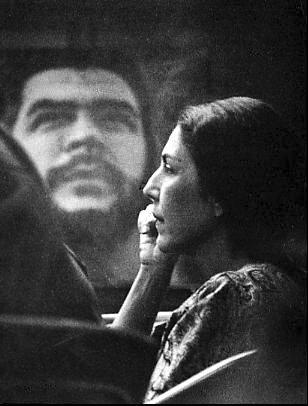 In “Celia Sanchez: Was She Castro’s Lover?” Linda Pressly (BBC Radio 3) delves into the private life of Celia Sánchez, who along with Haydée Santamaría and others, was one of the major women leaders of the Cuban Revolution. As Pressly states, “Respected and trusted, Celia Sánchez became one of the chief organizers of the resistance fighting Cuban president Fulgencio Batista.” I am not sure why this really matters, but, 30 years after her death, there is still a debate going on about “how intimate the two of them really were.” See excerpts with a link to the full article below:

Celia Sanchez was at the heart of the Cuban revolution for over two decades and after meeting Fidel Castro in 1957, she became his indispensable aide. There has been speculation they were lovers. But neither Sanchez when she was alive, nor Castro, ever addressed the rumours. Outside Cuba, little has been written about the role Celia Sanchez played until her death in 1980.

The earliest picture of Sanchez and Castro together was taken when they first met, in 1957, but Sanchez had already played a crucial part in his life. After Castro made a disastrous landing in Cuba from Mexico in December 1956 – and lost the majority of his men – it was the clandestine network of peasant families organised by Sanchez that was critical to the rebels’ survival.

Celia Sanchez Manduley was born in 1920. She grew up in the sugar town of Media Luna, in the tropical east of Cuba, known as Oriente. Her mother died when she was young, and she was close to her father, Dr Manuel Sanchez Silveira. He was a cultured man and committed to the liberal Orthodox Party. Celia Sanchez learned about politics from him, and as his assistant, she saw the effect of extreme poverty on his patients. She also became well-known across the region, and her local contacts would be invaluable later.

When Fulgencio Batista took power in Cuba for the second time following a coup in 1952, Sanchez – like millions of Cubans – was outraged. She was convinced it would take violence to overthrow his dictatorship, and began to organise resistance.

In July 1953, Castro made his first attempt to topple Batista, and attacked the Moncada barracks in Santiago. Sanchez joined Castro’s July 26th Movement. When he returned from exile in Mexico, she organised the transport of supplies up to his rebels in the Sierra Maestra, recruited volunteers, and was one of the main points of contact.

By 1957, in Batista’s Cuba, Sanchez was the country’s most-wanted woman. When it became too dangerous for her to remain on the plains, she joined Castro up in the Sierra Maestra. At the command post of La Plata, she had oversight of food, clothes and arms – everything needed to sustain the rebel forces in their guerrilla war. And she was never far from Castro. She also went into battle. [. . .] Sanchez had a clear leadership role. [. . .] When Castro came to power in 1959, Sanchez remained his most valuable aide, and worked alongside him until her death.

[In Search of Celia Sanchez is the BBC Radio 3 Sunday Feature and will be broadcast at 19:45 GMT on 11 December. You can also listen online via the BBC iPlayer.]