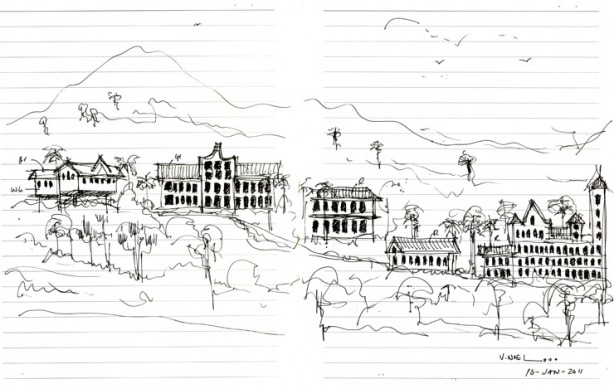 The Abbey of Mount St. Benedict, established in 1912, is a functioning monastery in a spectacular location in the mountains of the Northern Range. From below one sees, 800 feet up the mountainside, an informal grouping of buildings with beige walls and red tile roofs dominated by a tall campanile. The monastery began as a place of refuge for monks escaping civil unrest in Brazil, its first building a simple mud and grass ajoupa. The community is now a sizable complex, designed and constructed by Brother Gabriel Mokveld, primarily between 1938 and 1956. It includes a farm, an apiary, a school, and a rehabilitation center.

The Prime Minister confirmed this yesterday when questioned by the Express following the opening ceremony of the fourth Caricom-Cuba Summit at the National Academy for the Performing Arts (NAPA) in Port of Spain.

“It is true. The Venezuelan Ambassador (María Eugenia Marcano Casado) advised that it would be appropriate, he’s a very devout Catholic and indeed she suggested it may be an appropriate gift for him,” said Persad-Bissessar.

“He was very pleased to get that gift and he indicated he would want to come here now to get more of that Holy Water at Mount St Benedict, he’s a very devout Catholic,” she added.

The Prime Minister said when Chávez received the gift, “he seemed quite happy if I may so myself but you might want to ask him but it was on the advice of the Venezuelan Ambassador”.

Persad-Bissessar was in Venezuela last weekend where she attended the Community of Latin American and Caribbean States (Celac) meeting hosted by Chávez.

But while  Chávez was happy with his gift of holy water, Cuban President Raul Castro had some reservation about his present from the Prime Minister.

Castro who left this morning and who attended the Caricom-Cuba Summit yesterday, paid a courtesy call on the Prime Minister on Wednesday shortly after his arrival in the country and was presented with a painting by a University of the West Indies art student which depicted slavery—the black slaves and the white masters.

Castro said he did not agree with the concept as black does not mean evil. He said he will interpret the painting in his own way.

For the original report go to http://www.trinidadexpress.com/news/A_bottle_of_sacred_water_from_the_Mount-135293788.html