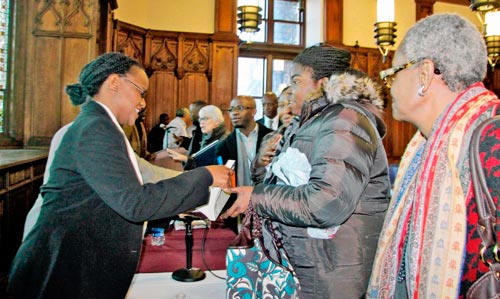 Prolific writer and MacArthur Genius Grant recipient Edwidge Danticat was featured on the City College (CCNY) campus on Nov. 18, Tequila Minsky reports in caribbeanlifenews.com. Our thanks to Peter Jordens for bringing this item to our attention.

Ms. Danticat was present as scholars discussed Haiti and Haitians at a panel titled: Haiti in the Age of Danticat, part of the 2011 Langston Hughes Festival. Coming from different disciplines, three area Haitian professors approached the subject of who are and who speaks for Haitians from different, yet connected angles.

Dr. Jean Yves Plaisir, from Borough of Manhattan Community College, discussed the sociology and demographics of the Haitian Diaspora, where they live (Miami, Boston, N.Y., Atlanta, Chicago) and where they can be found (in the churches).

French literature professor at Barnard College, Columbia, Dr. Kaiama Glover brought up a specific controversial episode that Edwidge Danticat responded to in an article in Essence Magazine in her presentation on the ethics of storytelling.

A woman, K*, gang-raped in Haiti was tweeted about by an international journalist who eventually published a story in Mother Jones. When the survivor K* discovered this, she wrote: You have no right to speak of my story… Because I did not give you authorization. I did not speak to you. You have said things you should not have said. Thank you.

K* was angry in how the international author had portrayed her, also ignoring her and continuing to make K* a part of her story. K* gave Edwidge permission to publish her letter.

NYU Professor Dr. Millery Polyne, rounded out the panel in discussing the current “(re) building of Haiti” begging the questions: Are these really novel, innovative plans? and where are the Haitian voices? in his presentation “Haiti and the Politics of Newness.”

Following their presentations, Ms. Danticat joined the panel adding her observations, responding along with the others to questions from those in attendance.

In the evening, Edwidge Danticat received the Langston Hughes Medal, given to distinguished authors of the African Diaspora. The medal honors Langston Hughes’ life-long commitment to social change through works that reflect various cultures with roots in an African heritage.

In receiving the honor Ms. Danticat said, “My life, for reasons that only the universe fully understands has been one in which I always feel I am walking in the footsteps and on the shoulders of giants. Nothing that has happened in my life thus far has proven this more true than tonight.”

Missouri-born Hughes (1902-1967) is a major American poet and central figure of the Harlem Renaissance, not far from City College. His poetry is filled with the rhythms and sensibilities of blues and jazz and also depicts urban African-American life.

Edwidge Danticat, born in Haiti, came to the United States at the age of 12. Her non-fiction book, “Brother I’m Dying,” won the 2007 National Book Critics Award. She was a finalist for the National Book Award with her collection of short stories, Krik? Krak!. Her most recent book is non-fiction, “Creating Dangerously.”

For additional coverage of the story go to