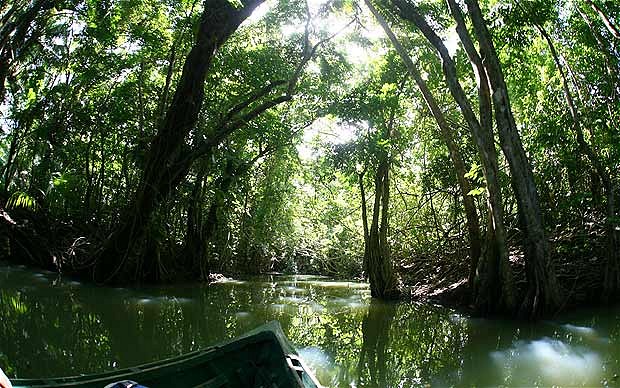 David Hoppit promised his grandsons a life-changing adventure. They found it on the Caribbean island of Dominica, as he reports in this article from London’s Telegraph.

Beyond the rusting cannon on a cliff top we noticed a fallen branch – at least we thought it was a fallen branch. As we moved closer the branch slithered quietly into dense undergrowth. Our guide, super-fit Gilles, remarked that the boa constrictor (for that is what it was) was of only modest size. They grow considerably larger than our 10ft specimen.

We were exploring Dominica, largest of the Windward Isles and self-proclaimed natural history island of the Caribbean; and what an abundance of natural history it has. The good news, however, is that none of the creatures on this 229sq mile paradise is especially dangerous. Even the beaches have very few mosquitoes or sand flies.

A couple of years ago, I took my eldest grandson Daniel on a memorable trip up the Nile. His younger brothers, Ben, 14, and Eddie, 13, were determined that they should have an equally life-changing adventure; and friendly, community-minded Dominica provided just that. On the evening of our arrival, the first turtle of the year heaved herself up the beach to lay eggs in a safe, sandy nest by Rosalie Bay, one of the newest and most environmentally friendly resorts in the archipelago. Then, right on cue, a tiny blue-headed hummingbird, one of four species on the island, built an exquisite nest, no larger than an old half-crown, in a frangipani beside the reception entrance.

The two incidents helped to give us an instant insight into the fragility of nature here. The tiny bird, with an enormous heart, has to find twice its body weight in nectar every day; and the giant turtle had overcome unbelievable odds – just one in 1,500 hatchlings survives 30 years or more to full maturity.

During a packed seven-day adventure the boys learnt to snorkel in the “champagne” reef near the capital Roseau. Later on the same day, while on a whale-watching trip, we were surrounded by 200 or more spotted dolphins, performing unbelievable gymnastic displays. What we really wanted was to see a sperm whale – surely the prince of whales. We had only a distant glimpse of a tail and a spout, but it was enough to set the pulses racing.

The next morning, as we enjoyed a healthy alfresco breakfast at Beau Rive hotel, we saw that the bay below was apparently filled with boiling water as a whole family (more correctly a pod or school) spouted and dived, as if to apologise for missing us the previous day.

While the sea surrounding Dominica is abundant with coral and fish, the island is even more notable for its virgin rainforest, which covers 70 per cent of the land. Parts of the island have 400in of rain a year and this feeds a mind-boggling diversity of plants and wildlife among the lakes, fumaroles and sulphur springs.

The list of species is encyclopedic, with many of them found nowhere else on Earth. There are 175 different birds, including two parrots and four humming birds, 1,000 wild flowers and no fewer than 181 ferns, including four tree ferns.

In the vast rainforests there are at least 70 species of tree that exceed 100ft when fully grown; as well as 50 types of butterfly, 12 types of bat, 150 different spiders and 81 orchids. There used to be 80, but a hurricane in 1979 brought spores of an African orchid (Orchis davidii), adding one to the total.

If snorkelling and whale watching were the highlights for Ben and Eddie, my magical moment occurred during a memorable trek with Bertrand Baptiste, known throughout the Caribbean as “Birdy”, first to Emerald Pool and then through Syndicate Forest. His knowledge, not just of ornithology but of every aspect of the island’s natural history, is formidable.

Peering across a valley of dense jungle, he spotted a distant parrot perched on a branch. With the help of his tripod-mounted telescope we had a privileged view of this rare bird.

The 110,000 Dominicans claim the island has a river for each day of the year and the number of waterfalls and pools is beyond counting, but the island’s fortunes have struggled since 1997 when the EU killed off the banana industry. There is, therefore, much poverty in Dominica, but no hunger, the forests providing an inexhaustible pantry of food.

Now the economy depends largely upon the almost daily influx of cruise-ship passengers. One of the highlights for many of the passengers is a visit to the Rainforest Aerial Tram, a remarkable feat of engineering which transports visitors above the jungle, though many visitors will baulk at the £40 it costs per person.

Walking long distances is part of the culture of Dominica and although there are now roads, many people still think nothing of tackling hilly terrain to see a chum 10 miles or more away.

This culture has inspired the most recent addition to the island’s attractions – a 120-mile trekking trail, the longest in the Caribbean, which takes the walker through breathtaking scenery along the length of the island. It is called Waitukubuli National Trail, this being the original Kalinago (or Carib) name for the island, meaning “tall is her body”.

The trail is divided into 14 segments, none of which are a stroll in the park, and some of which are decidedly challenging. The plan is to provide two homestays in each segment within modest local dwellings. These will provide a small income for owners and save hikers lugging camping equipment all the way; the lodgings will also offer evening meals.

Our guide, Gilles Carbon, is among those who have already agreed to join the homestay providers. She told me that the charge for a stay at her home would be about £34 per person and she would charge around £37 a day for guiding visitors along one of the final two segments.

The trail is based on ancient Carib tracks, once used to take produce to and from market. Allow at least two weeks to complete it. Halfway along the trail sweeps eastwards to the Atlantic side of the island, where it passes several villages that are within land allocated to the original Kalinago Indians, now known as Carib Territory.

These friendly people, the remnants of the original inhabitants, have their own visitor centre demonstrating the ancient ways of life. Human nature being what it is, only about 30 per cent of the 3,500 Caribs are now pure blooded. In the past, there was rivalry between Dominicans and Caribs, but these days local children are taught respect for the environment and tolerance for one another.

Most islanders also display a passion for nature. The beaches up which leatherback and hawksbill turtles lumber to lay eggs are patrolled 24 hours a day; but there is still a way to go – there’s no recycling system for the ubiquitous plastic cups.

Among the many other highlights of our adventure was a trip in a rowing boat along Indian River, where much of the Pirates of the Caribbean was filmed. There we stopped at a jungle bar to enjoy drinking from a freshly picked coconut.

The only hard thing about our visit to the natural history island was leaving it behind. Ben and Eddie want to live there.

For the original report go to http://www.telegraph.co.uk/travel/activityandadventure/8899219/Dominica-the-Caribbean-a-Boys-Own-island.html