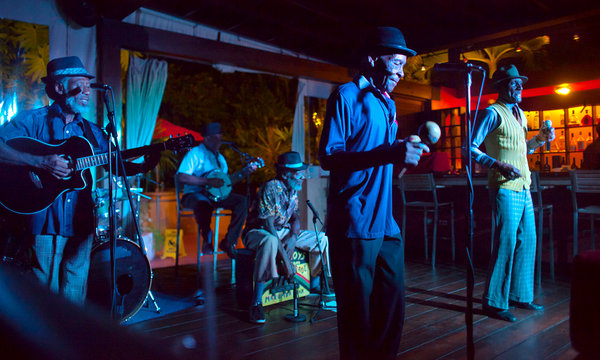 DAVID KAUFMAN writes about the revival of mento music in Jamaica. Follow the link below for the original article and a great Slide Show.

LATE on a balmy Saturday evening in August, as Hurricane Irene churned far out in the Caribbean, the singer Albert Minott and his mento band, the Jolly Boys, were charming the crowd at the Bush Bar, a jungle-shrouded watering hole at the GeeJam resort in the Jamaican harbor town of Port Antonio. Nattily dressed and slim as an exclamation point, Mr. Minott, 73, slunk sensually across the stage as he delivered a soulful, gravelly voiced set that included Jolly Boys originals and covers of the Velvet Underground and Amy Winehouse.

Born and raised in Portland Parish (Port Antonio is the capital), the Jolly Boys were making a rare hometown appearance between a summer European tour opening for Sade and a series of autumn concerts in Australia and Asia — a surprising comeback for a band whose youngest member is 72.

“They used to play for us for rum money and cigarettes,” Patrice Flynn said of the band at the Bush Bar gig. Ms. Flynn’s husband, the movie star Errol Flynn, who died in 1959, named the troupe back in 1946 as a testament to its good-vibe routines. Sixty-five years later, Ms. Flynn was joined in the audience by Jon Baker, an owner of GeeJam and a long-time music industry executive who has helped orchestrate the unlikely comebacks of both the Jolly Boys and Port Antonio.

Back when the band formed, mento, which predates better-known Jamaican genres like reggae and ska, served as the background beat at private villas and gated resorts across Portland, on Jamaica’s rugged northeastern coast. Rooted in African slave melodies, mento is laden with sexually charged innuendos and yet manages to be folksy and feel-good — a contrast to populist, politicized reggae.

By the 1970s, however, mento and the Jolly Boys had faded into obscurity, just as Port Antonio — its literal and spiritual home base — was overtaken by spots like Negril and Montego Bay as leading Jamaican tourist destinations. But while southern Jamaica succumbed to cookie-cutter resorts with relentless reggae soundtracks, Porty — as the town, a three-hour drive through the Blue Mountains from Kingston, is known — retained the trapped-in-time ambience cultivated by the owners of estates in the area, including the Flynns, the Aga Khan and the Westons, a wealthy Canadian family.

As I discovered during that August visit, those spots are all still present in some form: the Flynns’ sprawling, sea-front cattle ranch; the former compound of Princess Nina Aga Khan, now a spa-resort called Tiamo; and, most notably, Frenchman’s Cove, the Westons’ 42-acre resort, which opened back in the 1960s as one of the world’s most expensive hotels. Today, its 29 modernist rooms begin at barely $100 per night — with décor and service accordingly spartan — and it mainly attracts young Europeans. Its cozy, namesake beach, though, remains as secluded and sapphire-blue as when it was host to Queen Elizabeth II over a half-century ago — as does the nearby Blue Lagoon, a 200-foot-deep blue green basin that gave its name to the 1980 film.

Beaches and lagoons — along with rivers, waterfalls and marinas — are the setting for most of Port Antonio’s daytime activities. The surging swells at Boston Bay, for instance, have lured surfers to its reef-ringed shoreline, a half-hour drive from town, since the Jolly Boys were first making music.

But it is après-surf snacking that draws visitors year-round to the bay, where — according to local legend — the spice-rub preparation known as Jamaican jerk was born in the 1950s. Whether or not that’s true, local cooks have successfully exploited the association. Clustered just above Boston Beach are nearly a dozen jerk shacks — including Shaggy’s, Glasses and Little David’s — selling sliced chicken and pork spiked with rubs of Scotch bonnet pepper, lime juice and ginger. Grilled over coals in steel drums, the jerk is sold by the pound and served simply on newspaper and paper plates. On our visit to Little David’s, we paired our meat with “festival” (deep-fried hush puppies) and hand-pressed juices, including tart June plum and mango-ginger, ice-cold and delicately sweet.

Nearly as refreshing were the waters at Reach Falls, a series of cascades, caves and waterfalls a 90-minute drive high into the Blue Mountains, which we visited the following day. It was a Sunday, and local families crowded the cool, clear pools. Eager to explore deeper into the jungle, we met up with Kenton Davy, a thickly muscled local guide with medium-length dreads and a thick Jamaican accent. Coursing through the cascades, Mr. Davy led us a half-mile upstream to the Mandingo Tunnel, a curiously named vertical cave hidden within a massive boulder complex that leads to a subterranean pond.

As we huddled together in waist-high water, Mr. Davy stood at the tunnel’s entrance and described its distinctive geology. Then, in an instant, he was gone — suddenly some 20 feet underground, beckoning me to join him in the tunnel. I followed, first sliding down the snug opening before carefully contorting my body until I plopped into the water. The rest of our group quickly followed, all relieved to reach the seemingly impenetrable surroundings.

After a thrilling but nerve-racking exit, we headed, wet and hungry, back to town via Long Bay, a broad, wide, sandy beach where John Maire was serving burgers, steaks, tender jerk and vegetable-topped pizzas at his aptly named Chill Out Bar. (Mr. Maire has since opened Picaroons, a cliffside restaurant in the nearby hamlet of Ross Craig, where he serves a similar menu.)

After a day spent rafting down the languid Rio Grande, a half-hour outside of Port Antonio, I dedicated my final day in the town’s compact center to a hunt for recordings of mento and the Jolly Boys. I began at Jermain Music, a tiny shack on the edge of the Musgrave Market where Clayton Powell, the owner, custom mixes CDs for less than $4 a disc. He had plenty of reggae and dance-hall that day — and even a few mento mixes — but no Jolly Boys. Neither did Pieyaka Muzik, just across the street, though the shop did offer an impressive collection of Trinidadian soca and steel-drum tunes. I consoled myself with a strong cappuccino — and even stronger air-conditioning — at Dekal Internet Cafe, where the German-born owner, Kaspar Deecke, bakes buttery-rich croissants, cakes and cookies, served alongside strong Jamaica Mountain coffee.

Cooled and fortified, I strolled amid the weekday throngs in downtown Porty. I soon arrived at Porty’s marina — built in 2002 at a cost of $14 million to be host to international mega-yachters who have yet to materialize. Mr. Baker, of GeeJam, remains confident they will — along with a 21st-century version of the sophisticated swells who originally placed Porty on the map over a half-century ago.

“Port Antonio’s second coming is around the corner, fueled by an eclectic crowd that matches the uniqueness of its original pioneers,” Mr. Baker said. “By next season the momentum will be very apparent and the choices for the visitor truly diverse.”

Indeed, Mr. Baker himself is currently restoring the historic Trident Villas and its nearby Castle, a grandiose private chateau once favored by celebrities like Johnny Depp. Mr. Baker intends to reopen both next year, along with newly upgraded facilities — and a pair of renovated modernist villas — at the Blue Lagoon.

Later that day I was back at GeeJam watching the Jolly Boys rehearse in its tropical-wood studio, where Amy Winehouse, Drake and No Doubt have all recorded albums. Mr. Minott, as always, was smartly dressed, in a matching gray shirt, slacks and tie, capped with a brown fedora. Seemingly dazed from the band’s tour through Europe — and perhaps by the Asia trip to come — he reflected on the Jolly Boys’ late-in-life resurgence, along with Porty’s own nascent comeback.

“People are finally talking about us, we have thousands of fans on Facebook — and I didn’t even know what Facebook was before now,” he said. “But I’m not that surprised. After all, the Jolly Boys and Port Antonio never really went away.”

For the original report go to http://travel.nytimes.com/2011/11/13/travel/in-jamaica-mento-music-makes-a-comeback.html