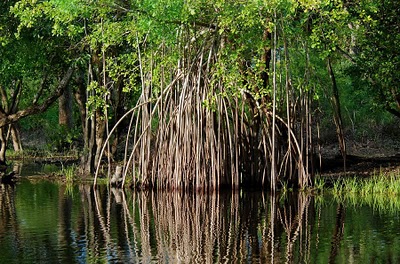 CORAL’s (Coral Reef Alliance) mangrove reforestation project in San Pedro, Belize is thriving. Recent monitoring reports reveal that ninety percent of the mangroves planted by the local community have survived—a true testament to the effectiveness of the CORAL reforestation method.

The method used is the Riley Encased Methodology (REM), an innovative planting technique that dramatically increases seedling success. It was developed by Bob Riley of Mangrove.org. REM has radically transformed the ability to mitigate ecological degradation and increase the biodiversity as-well-as resilience of coastal ecosystems. Given the success of the project so far, CORAL is preparing to plant additional mangrove seedlings in Boca del Rio Park this winter. Part of these successful efforts have included organizing educational summer camps for children in order to prepare the younger generations to be aware of the environment and to learn how to protect it.

Mangroves act as feeding and nursery grounds for approximately 74 species of fish and 178 bird species. They also provide habitat for many species of amphibians, reptiles, and mammals. Belize is home to 4 different species of mangrove: the red mangrove (Rhizophora mangle), the black mangrove (Avicennia germinans), the white mangrove (Laguncalaria racemosa), and the buttonwood (Conocarpus erectus). The red mangrove is most often found along the water on cayes and waterways and is easily identified by the long prop roots that support the plant. The black mangrove is usually found farther away from the water’s edge and can be recognized by the small protrusions called pneumatophores that encircle the base of the tree on the ground. These pneumatophores help to facilitate gas exchange as do the long prop roots found on the red mangroves. The white mangrove and buttonwood species are generally located even further away from the edge of the water.

Photo of mangroves from http://matalagoon.blogspot.com/

One thought on “Mangrove Reforestation Project in San Pedro, Belize”