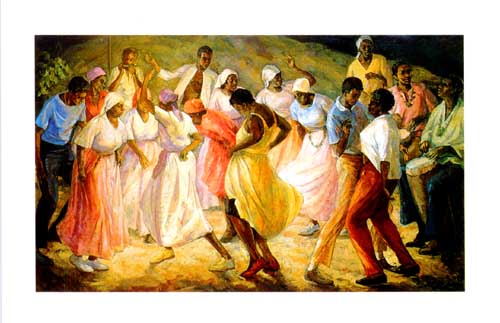 As its contribution to the Edna Manley College of the Visual and Performing Arts’ inaugural Rex Nettleford Arts Conference — ‘The Arts: Catalyst for Caribbean Development’ — the National Gallery of Jamaica hosted, on Thursday, a public lecture by Jamaican Master Painter Professor the Hon Barrington Watson, CD, OJ. Tamara Scott-Williams, writing for Jamaica’s Observer.

In a nutshell, Barrington’s bio is this*: he was born in Lucea, Hanover in 1931. He was educated at the Royal College of Art, London (1958-1960) and continued his study of the works of European masters at the Rijksacademie, Amsterdam, the Academia de las Bellas Artes in Madrid and other major European art schools. He returned to Jamaica in 1962 to become the first director of studies at the Jamaica School of Arts and Crafts (now part of the Edna Manley College) and spearheaded a new curriculum which allowed graduating artists to filter into the areas of teaching, advertising and television, as well as the conventional fine and applied arts.

As a founding member of the Contemporary Jamaican Artists Association in 1964, along with his fellow painters Karl Parboosingh and Eugene Hyde, he quickly became one of the leading artists of the post-Independence period in Jamaica, whose work represents a turning point in the development of Jamaica’s cultural and artistic aesthetic and professionalised the local artistic practice.

His many accolades include the Institute of Jamaica’s Gold Musgrave Medal and the Order of Jamaica.

But his life is so much bigger. And his contribution to Jamaica’s cultural heritage goes well beyond the hundreds of paintings (and three sculptures) that he has created in a near lifetime of creative endeavour.

Barrington turns 81 years old in January and, as is befitting of his talent and contribution to Jamaica’s cultural heritage, the National Gallery is currently planning a major Barrington Watson retrospective — the first ever for a living artist — which will include paintings and works on paper from the late 1950s to the present and explore the major themes in his work.

This exhibition, curated by Dr David Boxer, curator emeritus of the NGJ, Claudia Hucke and O’Neil Lawrence will open on January 8, 2012 at the National Gallery, The Bank of Jamaica, the Olympia Art Centre and at Orange Park, St Thomas, and accompanied by a major catalogue publication. It is a must-see.

But back to the lecture…

His opening line was this: “We should be more secure in our position in the world of culture. We should be taking all the art that is produced here all over the world.” He’s right. Our art has not received the level of international acclaim that our athletes and our musicians have, but our artists are no less talented or internationally competitive. The issue, as he sees it, is that the marketing of our art is a problem.

But marketing his art has never been a problem for Barrington. His oft-quoted response to someone who suggests that one must be wealthy in order to acquire a Barrington is that “when one acquires a Barrington he becomes wealthy”, and he fully admits that art is a luxury.

Yet his works are desperately sought after and stolen, his drawings are coveted by collectors and his signature, even if on a sticky note, is a treasured item — judging from the throngs of young folk who clamoured for an autograph after the lecture. It was a rock star moment for this gentleman.

And he is a gentleman. Dapper from day one in his jacket and tie, pipe and “motor car”, he set a disciplined bar in appearance as the first director of studies at our School of Art; and the English accent he affected after his near decade-long sojourn on the continent was certainly the talk of art students and faculty alike.

But he gave them something more than talk — he gave them the tools, the degrees and diplomas that would allow artists to become professionals in their own right in a field that was commonly thought to be an idle pursuit.

And to all those artists in the audience who wanted to know how they could avoid the financial pitfalls that often come with their chosen field, he relayed to them in warm, low tones the story of his life, and the three things that he knows for sure are responsible for his professional success.

For Barrington, it was never about the money. It was about the single-mindedness of purpose with which he pursued his God-given talent in the face of his father declaring that it would be over his dead body that Barrington would become an artist. (A sentiment withdrawn many years later when Barrington’s portrait of Norman Washington Manley was unveiled at a gathering and brought Vernon Watson to tears. For he realised that as much as he may have wanted Barrington to be a lawyer, the lawyer that Barrington had painted did not have the talent that Barrington did).

Barrington’s rules are not just for art, they are rules for life.
For the original report go to http://www.jamaicaobserver.com/columns/Barrington-Watson–A-life-in-paint_9905483#ixzz1awv7Awek

One thought on “Barrington Watson: A life in paint”